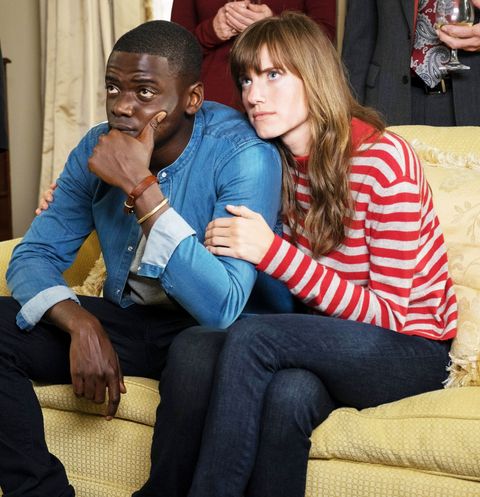 In Get Out,writer-director Jordan Peele takes 90 minutes to meditate on a lesson Kim Kardashian once spelled out for America via snake emojis and Taylor Swift: White women are not to be trusted. I'll let you decide how offended you want to be by that thesis while I spoil the hell out of this movie.

Get Out draws on the terrifying elements you might expect to find in your typical February horror movie release. There's hypnotism, multiple jump-scares, a Deliverance-style redneck, and an illicit basement surgery where a doctor operates on people's brains without their consent. As scary as these things are, they're tropes we can all recognize as pure fiction–for the most part. They're things we're more likely to find in film, books, or television rather than in our everyday lives. Unfortunately, the horrors of racism and white womanhood aren't confined to imagination and pop culture. But in using both realities in his movie, Peele brings Get Out to a higher level of terror—at least for any person of color in the audience. We're all keenly aware of how possible it is.

Peele brings 'Get Out' to a higher level of terror—at least for any person of color in the audience. We're all keenly aware of how possible it is.

The film begins with Chris (Daniel Kaluuya) traveling home for the weekend to meet his girlfriend Rose's (Alison Williams) parents who live on the set of a horror movie—excuse me: in a secluded, wooded, mostly white suburb. Her surgeon father Dean (Bradley Whitford) and hypnotherapist mother Missy (Catherine Keener) pepper Chris with questions and try to establish their anti-racist cred by telling him how many times they voted for Obama. They lead Chris past their black help—a maid and a groundskeeper—and burden him with their performative white guilt. These are the kind of awkward interactions any black person in the audience would expect out of this situation. Chris takes it in stride, as we all do, and even comforts Rose when it seems like her eyes are being opened to her family's racial microagressions for the first time.

When Missy offers to cure Chris of his nicotine habit via hypnotism, he's weirded out but passes it off as an oddity. He even tries to keep it together after he's convinced he has, in fact, been hypnotized and nearly attacked by their groundskeeper Walter (Marcus Henderson). It's not until Chris realizes that a man who's been missing from his neighborhood for months is living in the suburb (married to a white woman twice his age seemingly against his will) that he knows something is very wrong. As it turns out, Rose's family is running a ring in which they lure black people into their home, hypnotize them using a literal silver spoon, then auction them off to middle-aged, white suburban neighbors who—through surgery—go on to live in the black people's younger, healthier bodies forever. It's a literal and visual representation of building a better life in America on the backs of the subjugated.

As the plot unravels, it seems that Rose is willing to take Chris's suspicions seriously and, as the title indicates, get out. And I believed her. I believed her even after Chris discovered a box in her room filled with pictures of the other black men and women she'd seduced for her family before getting to him. My brain jumped to the next "logical" conclusion. Clearly Rose's mother had hypnotized her daughter into being part of their scheme, making Rose forget each time she'd lured a black person home for them.

I recognized the sinking feeling of being betrayed by a white woman you've stanned for, loved, liked, or even simply been mildly okay with.

I held onto that theory until the final possible moment, when Rose turns to Chris as they're supposedly attempting to escape together and says, "You know I can't give you these keys." It was a familiar sensation, one usually played out over a longer period of time. But here, condensed into one 10-minute span, I recognized the sinking feeling of being betrayed by a white woman you've stanned for, loved, liked, or even simply been mildly okay with. It's that feeling when you find out that, after enjoying her in Easy A and finding her bubbly personality lovable, Emma Stone was fine with playing an Asian woman in Aloha. Maybe you went through it with Scarlett Johansson when you found out that she'd accepted the lead role in Ghost in the Shell, an adaptation of a Japanese anime series. It's the betrayal you feel the first time you realize that women who are labeled pop-culture feminist icons—like Tina Fey—are perfectly fine with gunning for blackface laughs at your expense, or blaming your idols for white girls' lack of self-esteem. (Beyoncé is many things, but she is not the reason you hate your body.)

For some, it's the 53 percent of white women who voted for Trump. For others, it's finding out that the leader of your local NAACP chapter is literally a white woman in disguise. For others still, it's finding out that Taylor Swift's been coasting on America's fear of black men for years. I feel it every time I realize there's a white women on my Twitter timeline who will tweet in earnest for Planned Parenthood while sparing only a perfunctory tweet for Black Lives Matter or the Standing Rock Sioux.

The thought that white people may see you as no more than a body for use or a culture from which you can pick and choose what you like while discarding the rest and those who invented it? The idea that a white woman you see as your potential friend or ally will eventually prove to be looking out for her own best interests over yours or the greater good? These are concepts that the people of color watching this film are intimately familiar with.

Jordan Peele is married to and expecting a child with a white woman, Brooklyn Nine-Nine's Chelsea Peretti. He's also biracial; his mother is white. But as he reaffirms in his latest Nerdist interview with Chris Hardwick, Peele sees himself—and experiences the world—as a black man. American history is littered with the bodies of black men jailed, beaten, and killed due to the simple words of white women. "A few months later... two negro boys, ages 8 and 9 were arrested, tried, and sent to reform school for allegedly kissing or allowing themselves to be kissed by a neighborhood playmate, a 7-year-old white girl!"Langston Hughes wrote in 1962.

White women have always played, and continue to play, a large part in upholding the supremacy. They have not held the best interests of people of color. Putting full trust in them has often been to our detriment. Rose's willingness to put herself and, essentially, the survival of white bodies above the well-being of black people was as unsurprising as it was terrifying. In Get Out, whiteness trumps all, and the true horror is leaving the theater knowing that, in this case? It's not just a movie.