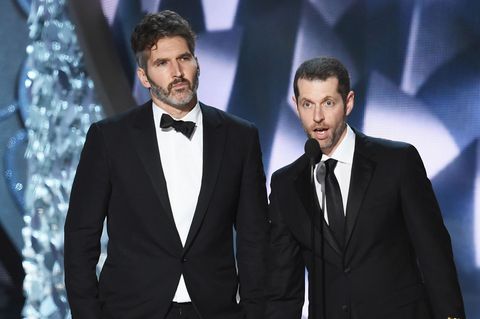 When it was announced Thursday that Game of Thrones showrunners D.B. Weiss and David Benioff were developing Confederate, a show set in an alternate timeline in which slavery was never abolished, the internet rolled up its sleeves, cracked its knuckles, and got straight to work.

Now, Weiss and Benioff have responded to the criticism in an interview with Vulture, in which they call the backlash "a little premature." (To be fair, they haven't actually begun work on it yet.)

"So everything is brand new and nothing's been written," Benioff said. "I guess that's what was a little bit surprising about some of the outrage. It's just a little premature. You know, we might f*ck it up. But we haven't yet."

Writer-producer Malcolm Spellman also emphasized that the issue should not be tried in the court of social media, and that he and his fellow producers were handling the concept thoughtfully.

"I don't know that we can change anyone's mind," Spellman said. "But what people have to understand is, and what we are obligated to repeat in every interview is: We've got black aunties. We've got black nephews, uncles. Black parents and black grandparents. We deal with them every single day. We deal with the struggle every single day...But when they're writing about us...they should be mindful of the fact that there are no sell-outs involved in this show. Me and Nichelle are not props being used to protect someone else."