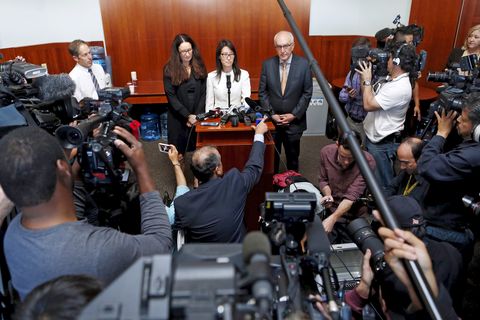 In 2015, Silicon Valley was riveted by the trial of Ellen Pao versus her former employer, esteemed venture-capital firm Kleiner Perkins Caufield & Byers (KPCB). The saga had begun three years earlier, when Pao filed a gender-discrimination lawsuit against the firm after partners were unresponsive to her claims that a colleague (with whom she had previously had a sexual relationship) used his seniority to stymie her career, hurting her chances for a promotion. Pao became the very public David battling tech's Goliath-size bias issues and endured a monthlong trial that saw her name dragged through the press—the stress of it all, she says, caused her to have a miscarriage.

Though Pao lost the case, her bravery in filing the lawsuit made her a hero to many women and helped change the conversation around sexism in tech. Now, Pao is back in the spotlight this month with a new book, Reset: My Fight for Inclusion and Lasting Change (Spiegel & Grau), which takes readers behind the scenes of the roller coaster she's been on—including her stint as CEO of Reddit (where she started the trend of tech companies banning "revenge porn"). Here, she talks about becoming an activist, what it will take to make tech's toxic culture disappear, and Project Include, her nonprofit that helps companies develop more-diverse workforces.

Marie Claire: In 2012, you sent an email highlighting the harassment you had experienced. What went through your head before you pressed "send"?

Ellen Pao: The idea that nothing could happen unless I made a formal complaint was very sad to me. But I realized my working harder, finding better investments, and being able to work with the founders—none of that was making any kind of difference, and it was really not about me; it was about this much bigger problem. I saw other women at KPCB who couldn't succeed, either—some had problems similar to mine, and there was this wave of men getting promoted instead of women who were equally, if not more, qualified.

MC: The trial was intense. How did you stay sane?

EP: Having higher goals of trying to call attention to a problem and to hold people accountable was really motivating for me, and it allowed me to ignore some of the more negative aspects. I watched the tide turn as people started speaking up about their own experiences. I also got messages of support from all over the world. One person said, "My mother got pushed into a broom closet when she got promoted." Having someone put a voice to those experiences and show that it's not just them, and second, it is not that individual's fault, was very powerful, and it connected a lot of people to me and my story.

"There was this wave of men getting promoted instead of women who were equally, if not more, qualified."

MC: Is there anything you wish you had done differently during the trial?

EP: I wish I had done better at the discovery phase of trial and not shared all 700,000 e-mails or whatever it was. I wish I'd hired a PR firm earlier on. It's not my nature or my style to go out and have this huge press campaign, but it would've helped if I'd had talking points to manage the press in a certain direction; it definitely would have counterbalanced some of the work KPCB was doing, but I didn't have the time or money. They had several people working on it all day long during the trial; I just couldn't match it in any way as an individual, but at the end of the day, I did the best that I could at the time.

MC: Some of your decisions at Reddit made you the target of trolls. How did you deal with that?

EP: It got to a point where the harassment was so ridiculous and unreasonable that it was not something I took personally anymore. When people are criticizing you for being overweight based on a picture of your head Photoshopped onto somebody else's body, it's hard to internalize that criticism. The mission of improving the Internet and giving people room to have better conversations and to share ideas was what drove me.

MC: Why do you think the exclusionary culture is so pervasive in tech?

EP: There are a couple of things driving it. One, it's friends bringing on friends. A group of guys out of the semiconductor business started the first VC firms, including KPCB, and then they hired their friends, who were also predominantly white men who had gone to Harvard or Stanford. So that endless cycle was perpetuating itself. The second part was, people saw Mark Zuckerberg as the ideal entrepreneur. He was young, and Facebook was this huge success.

A lot of VCs had doubts about investing in Facebook early on because they didn't take it seriously and then realized that was a huge mistake. After that, they all wanted to invest in the next Mark Zuckerberg. And what would the next Mark Zuckerberg look like? A white man who dropped out of Harvard or Stanford who was an engineer and incredibly young.

"We work with tech companies on inclusion—not just women, but every single person in the organization."

MC: That's why you created Project Include. What is its focus?

EP: Combined, my seven colleagues and I have 150 years of tech experience. Using all that knowledge, we work with tech companies on inclusion—not just women, but every single person in the organization; paying people fairly with a system based on experience and ability to contribute, not who someone knows or their past salary; and thinking about how you promote people—making sure you're giving everyone the opportunity to succeed.

MC: Do you worry that speaking up about discrimination in tech will cause women to avoid the industry?

EP: It's better to be aware of what you're getting into. I wouldn't want to send anyone into tech believing it's this true meritocracy that people touted it as when I joined. I'd much rather they go in with a realistic view and hopefully figure out how to navigate it the best they can.

MC: What's your advice for women facing discrimination at work?

EP: You have to be strong, and you have to be prepared for retaliation, unfortunately. You also have to be ready for people to make assumptions about you without even knowing you, and you have to be willing to become, potentially, a public figure. There is a lot that comes with it. I don't encourage people to litigate: It is so hard—painful and difficult. It's draining financially, emotionally, and professionally. But when you see that you could be the person who impacts the conversation in a meaningful way—or that you could inspire a few people to feel better about themselves, to speak up, to inspire others, to create this broader wave of change— I don't regret that at all.

Reset: My Fight for Inclusion and Lasting Change, $28, available September 19

This article appears in the September issue of Marie Claire, on newsstands August 15.