Daenerys Targaryen and Jon Snow have finally come face to face on Game of Thrones, and now they're spending their time getting to know one another and wallowing in sexual tension + mutual thirst. But while the two seem to be butting heads slightly, turns out they're basically the exact same person.

A genius on Reddit put together a series of side-by-side images that prove Jon and Dany have been sharing the same dialogue for quite some time, and are clearly mirrors of one another.

Game of Thrones has always been pretty good at foreshadowing (and the pair's union is somewhat inevitable given the fact that George R.R. Martin's book series is literally called A Song of Ice and Fire), but this takes things to a whole new level.

Watch the trailer for Sunday's episode below: 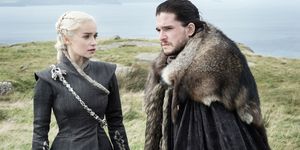 Mehera Bonner Contributor Mehera Bonner is a news writer who focuses on celebrities and royals—follow her on Instagram.
Advertisement - Continue Reading Below
More From Culture
Chelsea Clinton Announces 3rd 'She Persisted' Book
Who Is 'Bachelor' Contestant Kelley Flanagan?
Advertisement - Continue Reading Below
Who Is 'Bachelor' Contestant Alayah Benavidez?
The Best Korean Dramas to Get You Hooked
The Best New Music of 2020 (So Far)
Listen Up: Gripping New True Crime Podcasts
'The Bachelor' Has Already Finished His Season
Unmissable Horror Movies Coming Out This Year
Who Is 'Bachelor' Peter's Mom Talking About?
Sarah Coffin Might Be a 'Bachelor' Frontrunner