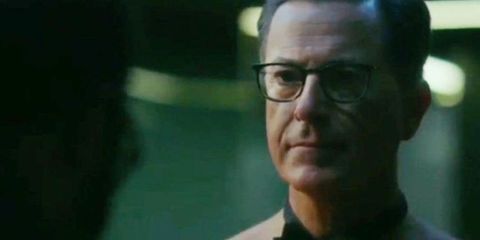 Ever wonder how awards-show hosts keep such an even keel while giving their various monologues? During Sunday night's Emmys, Stephen Colbert revealed the secret: "Hosts" for awards shows are actually "hosts." You know, from Westworld.

The maze was not meant for you, Host Colbert.@StephenAtHome @colbertlateshow #Westworld #Emmys pic.twitter.com/i6sg5cEJZB

Colbert "glitched" during the show, and was brought to Westworld to get recalibrated via Jeffrey Wright. "Have you ever questioned the nature of your reality?" Wright asks a starkly naked Colbert (though, for propriety's sake, he of course still wore a bow tie). "Every day since November 8," Colbert replies.

Doesn’t look like anything to us, @StephenatHome. #Emmys #Westworld pic.twitter.com/Uap9XxXuPY

Wright goes on to accurately describe the Emmys as "a day when all the beautiful men and all the beautiful women gather to give golden statutes to Julia Louis-Dreyfus" before testing Colbert's impression of every awards-show stereotype in the book.

Advertisement - Continue Reading Below
More From The Emmys 2020
What Everyone Wore to the Emmys After-Parties
Blake Paid Tribute to Leighton During the Emmys
Advertisement - Continue Reading Below
Patricia Arquette Makes a Plea for Trans Rights
The Emmys Were All About the Light Blue Dress
Twitter Is Obsessed with Zendaya's Emmys Dress
Alex Borstein Tells Women to "Step Out of Line'
What Emilia Wore to the Emmys
It's Valentine's Day on the Emmys Red Carpet
Gwendoline Christie Looks Like Jesus at the Emmys
Wait, Is Taylor Swift at the 2019 Emmys?