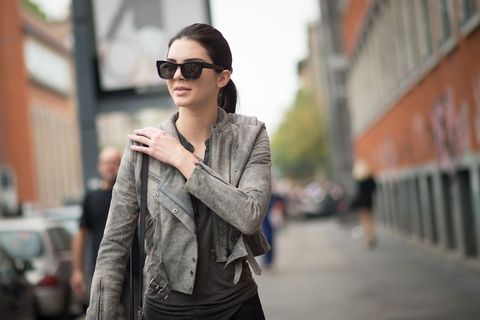 Kendall Jenner's 2015 is certainly off to an amazing start. The supermodel-in-the-making spent the holidays in Dubai with fellow model pals Gigi Hadid, Devon Windsor and Josephine Skriver swimming, skiing, and skydiving, not to mention spending a glamorous New Year's Eve wearing Balmain on the beach with designer Olivier Rousteing.

Now, today on Instagram, Jenner's agency The Society announced that the rising model has landed a coveted spot in the Marc Jacobs campaign for Spring 2015, captured by David Sims and styled by Jenner's biggest champion Katie Grand.

This is Jenner's first time featured in a fashion ad solo—she previously shared the spotlight in Givenchy's Fall 2014 ads with the Brant brothers, Jamie Bochert and Mariacarla Boscono. But the full Marc Jacobs campaign will also feature separate images with top models Adriana Lima, Joan Smalls, Karlie Kloss, and Natasha Poly. Looks like Jenner has officially made it to the big leagues.

This content is created and maintained by a third party, and imported onto this page to help users provide their email addresses. You may be able to find more information about this and similar content at piano.io
Advertisement - Continue Reading Below
More From Fashion
Your Guide to Spring 2021's Wardrobe Essentials
A Sleek Coat Is Chloe Gosselin's Power Pick
Advertisement - Continue Reading Below
Inspiring Mother-Daughter Owned Brands
Meet the Shoes You'll Live In This Summer
The Clogs We're Obsessed With
Fashion-Forward Cable Knit Sweaters
The Leggings You'll Wear Around the Clock
Crossbody Bags You Can Wear With Everything
Our Fave Pearlescent Accessories
Your Search for a Good Pair of Linen Pants Is Over