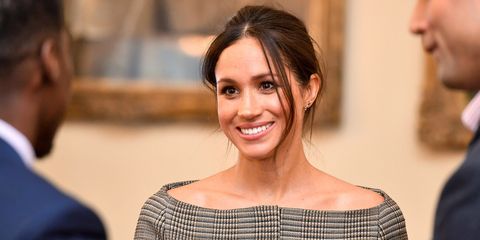 Meghan Markle's impressive impact on the fashion world continues. It's been revealed that the denim brand Markle wore during a visit to Cardiff in Wales with Prince Harry in January now has a three-month waiting list.

Markle wore a pair of black jeans by Hiut when she stepped out with Prince Harry to meet crowds of fans in Cardiff. Her stunning outfit consisted of a Stella McCartney coat, Tabitha Simmons shoes, a DeMellier London bag, and the black denim jeans by Hiut.

And now, co-founder of Hiut, David Hieatt, has spoken to the Daily Mail about the impressive effect Markle's wardrobe choice had on their company. He says:

"The website went absolutely crazy. We have a backorder waiting list for three months. We are having two more people in and we're moving to a new factory. The effect has been remarkable."

Hiut's black denim jeans retail for around $320, but the waiting list means that customers will need to be patient to get Markle's iconic look. The brand sells a number of styles, including the black skinny pants that Markle favors.

Hieatt told the Daily Mail, "Amazon Prime doesn't teach patience, that's for sure. But there's something lovely about having something of a world class nature and having to wait for it."

Markle had a similar effect on Scottish accessories brand, Strathberry, when she carried one of their bags on her first official engagement with Prince Harry.

You can explore Hiut Denim's website now, and select a pair fit for a future Duchess.