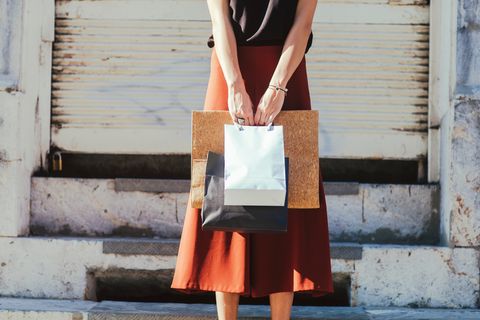 I have bought so many things because of Katie Heaney. Her newsletter "Do Not Buy" is intended to be a place for the Brooklyn author to share the things she's trying not to buy, instead foisting her buying urges upon her readers. But she readily admits (often) that she succumbs to her desires and purchases some items anyway.

In my case, possibly because of the reverse psychology trick that is the newsletter's mission (and my equal-to-Heaney's obsession with pajamas), the foisting works. I first became a fan of Heaney when she wrote for Buzzfeed, and then after reading her first memoir, Never Have I Ever, I kept seeing her name everywhere (she's a prolific freelancer) and found myself subscribing to her newsletter. I've clicked on subject lines like "Extremely loud earrings and soft fake food" and "Velvet sacks and luxury yogurts" and bought things that I never would have thought of getting, and probably did not need, thanks to Katie.

On January 3rd, after more than a year of producing such content, Heaney announced a big resolution: She vowed not to buy any clothes, jewelry, shoes, or bags for one year. "I did some calculations," she wrote in the intro to the newsletter, titled "No New Clothes 2018," "and by my estimation, I spent about six thousand dollars on clothing/shoes/jewelry last year. That's too much money!!!!!"

As a fan of the newsletter and her books (her latest memoir Would You Rather? was released in February), I talked to Katie about how, exactly, a self-described shopaholic with a newsletter about shopping is going to pull off...not shopping. In the process we came up with a few tips you can steal to save your own wallet.

Katie Heaney in a shirt she did not buy this year.
Chris Ritter

Marie Claire: How would you describe your newsletter before the clothing-buying-ban?

Katie Heaney: The spirit of the newsletter has always been the same. I provide some links to items I want, but probably, really shouldn't get. But then I end up explaining why I want them so much anyway, and some of the time I inadvertently talked myself and my readers into buying the things I was ostensibly telling them/us not to.

MC: What made you decide to stop purchasing clothing and accessories for a year?

KH: Ann Patchett wrote this great essay for the New York Times about how she didn't buy new clothes at all in the year 2016. My friend Chiara sent it to me and was like, "We should do this!" At first I was like, "Lol, no." But then I read and reread the essay, and I found it so compelling. I was definitely in the habit of buying a bunch of clothes I don't need, and especially once I became a freelance writer who worked from home, it started to seem like even more of a waste of money and energy. I'm also just competitive, and when Chiara told me she was going to do it I felt like I had to do it too, and better, if possible.

MC: What was the last item you bought?

"I just find it so soothing to know something new is coming in the mail."

MC: What are your purchasing triggers?

MC: Are there certain items that you find it harder to resist? For example: I will buy anything that is a tray or could be called a tray.

KH: Pajamas. I have a real problem with cute matching pajama sets.

MC: Me too! Have you done anything to protect yourself from the urge to shop? One of my friends blocks online stores, and I stopped listening to a podcast recently that was "making" me buy every single item they talked about.

KH: The main thing I'm doing to prevent myself from shopping is leaning heavily into my Catholic guilt, which I still have in abundance despite not having been Catholic in 15 years. I just know I'll feel so disappointed in myself if I quit or cheat or fail. And I will just love to brag if I pull this off, so I try to motivate that way.

I also try not to put things in my various online shopping carts just to leave them there, but I have done it with a few things. I definitely haven't eliminated the urge, though. I've sent a few "hints" to my girlfriend in the form of links to clothing items I'd really, really like...if she happens to find herself wanting to buy me something.

MC: What is the closest you have come to breaking this resolution?

KH: I am having a really, really hard time not buying this T-shirt in every color. My girlfriend bought me the black and white striped one and I swear it's the best T-shirt I've ever owned. I just think my life would be complete if I could have it in black and white and blue and the red stripe!

MC: Do you consider asking for gifts "cheating," and, if so, have you "cheated"?

KH: I would call asking for clothes a morally ambiguous loophole. I pretty much begged my girlfriend for that T-shirt, and I give her those "hints." Like, she chose the occasion—she gave it to me as a present on the day my book came out—but she only knew of it because I'd emailed her a link to it with a very leading subject line.

MC: How much money have you saved so far?

KH: I'm not sure, but it's probably at least $200 – $300. I think I've ended up buying a little more needless skincare than I would have, like this Vitamin C serum from The Ordinary that I haven't even tried yet, and I've bought far too many Colourpop highlighters and books. But I don't really punish myself for buying books. I am able to rationalize that as a professional responsibility. Still, I do think I've overall spent less than I would if I allowed myself clothes.

"Nobody remembers if you wore something at another event. And if they do, they really don't care."

MC: What about events? Are there any that you're worried about not having the right clothes for?

KH: I don't have any weddings this year, which would be the harder thing, but for nearly everything else—like my book launch party and readings—I definitely own enough suitable clothing for those occasions. That was one part of Patchett's essay that really stuck with me. You don't need something new every time there's an "occasion." Nobody remembers if you wore something at another event. And if they do, they really don't care.

MC: Even though it's ostensibly about not buying stuff, your newsletter was always about...buying stuff. What's it like sending out a weekly newsletter with things to buy when you're not buying things yourself? Does it feel like sadism? Or masochism?

KH: Yeah, it's a little torturous. I've actually only been doing it every other week because it was getting too hard to do that fruitless online "shopping" every week. While the mission of the newsletter was always to shop less and not buy the things I wrote about, I ended up buying at least 10 to 20 percent of them, I'd say. But now I really can't buy the things I'm telling myself not to buy.

KH: Probably something I find online in mid- to-late December this year, honestly, because everything else will be long gone (and hopefully forgotten) by then. Knowing me it'll probably be a sweatshirt.

How I Paid Off $23K in 5 Years
This content is created and maintained by a third party, and imported onto this page to help users provide their email addresses. You may be able to find more information about this and similar content at piano.io
Advertisement - Continue Reading Below
More From Fashion
Inspiring Mother-Daughter Owned Brands
Meet the Shoes You'll Live In This Summer
Advertisement - Continue Reading Below
The Clogs We're Obsessed With
Fashion-Forward Cable Knit Sweaters
The Leggings You'll Wear Around the Clock
Crossbody Bags You Can Wear With Everything
Our Fave Pearlescent Accessories
Your Search for a Good Pair of Linen Pants Is Over
Rainy Day Outfits to Make You Excited for Storms
Our Favorite Sunglasses for Summer 2021