On Wednesday night, Gigi Hadid closed out New York Fashion Week by walking in Rihanna's Fenty x Savage show. As everyone, including myself, headed home to crawl into bed, Hadid was on her way to one last party. The model traveled from Brooklyn to the city and arrived at Milk Studios ready to celebrate her collection for French jewelry brand Messika.

After walking the Fenty x Savage stage in lingerie, Hadid chose a covered yet sexy look for her nighttime soirée. The 23-year-old stunned in a strapless sequined jumpsuit, which gave off disco ball vibes. The piece hugged her silhouette and since the bottom half was semi-sheer, it revealed Hadid's G-string leotard underneath. Hadid paid no mind to this—she's worn plenty of naked dresses—as she smiled for the cameras and even posed with her father Mohamed Hadid, who came out to support her.

Hadid accessorized her look with Messika jewels and a pair of black strappy heels. The model's had a full fashion week schedule, but don't expect her to stop just yet. London Fashion Week begins tomorrow, followed by Milan, and Paris shows. Expect Hadid to dominate some of the runways as usual and debut even more exciting (possibly more naked) outfits. 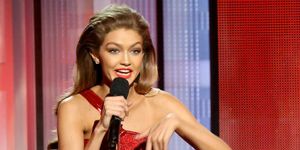 Gigi Hadid Does a Melania Trump Impression
This content is created and maintained by a third party, and imported onto this page to help users provide their email addresses. You may be able to find more information about this and similar content at piano.io
Advertisement - Continue Reading Below
More From Fashion
Ballet Flats Aren't Just for Audrey Hepburn
Found: Long Pendant Necklaces You'll Wear Forever
Advertisement - Continue Reading Below
Irresistible Camisoles to Work Into Any Outfit
What to Wear This Summer
Meet Your New Daytime Bag: The Clutch
Khaki Pants Will Be Your Go-To Summer Trousers
Meghan's Sunglasses Are On Sale for Prime Day
Fashion Line Christy Dawn Designs for Mother Earth
Found: The Best Fashion Deals on Prime Day
27 Early Amazon Prime Day Deals to Shop