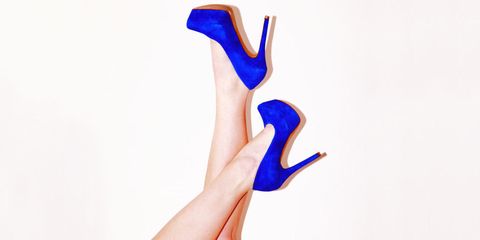 Whether they meant status, caused pain, or symbolized beauty — heels have been a staple wardrobe piece from Ancient Egypt to today's red carpets. Some ancient cultures wore them to stay above mud, while in modern times, we try to keep our red bottoms out of the mud. So where and why did this towering trend originate? Read on.

Whether it is lingerie or tattoos, the chic civilization of ancient Egypt has been on its trend game since about 4000 BC. Why did people opt for a little foot boost back in the day? The approach was more utilitarian than chic: Butchers wore heels to avoid dirtying their feet with the guts and remains of slaughtered animals. Gross.

Chopines win the "trip and die" scary shoe award — they basically consist walking on 5 to 36 inch stilts. Chopines were an international trend in Turkey, Italy and Spain. They were introduced for reasons such as status (the higher the stilts, the more luxurious your life was) and so that women's dresses would not get muddy. Another bizarre and archaic reason was to control women: These fashion femur killers made it difficult for women to run away from home or commit morally reprehensible acts, like dance.

Between his lavish, luscious locks and thigh grazing short shirt, it only makes sense that Louis XIV rocked red heels. The King was the original Regina George—one of the Mean Girls who stuck to the "you can't sit with us" motto when it came to his fancy kicks — only the in-crowd, the monarchy, was allowed to wear red as it was symbolic of power and wealth.

Roger Vivier came onto the scene with his three inch stiletto designs for Christian Dior in the mid-1950s. Like Dior, the designs were lavish, jewel adorned, and ulta-glam.

Vivienne's Westwood's freakishly vertiginous platform stilettos is what caused supermodel Naomi Campbell to teeter, topple, and fall on the catwalk. The shoes, named Super Elevated Gillie, had a nine inch heel height with a four inch platform, and secured Campbell a spot in the Runway Fall of Fame.

6. The It-Girl and Celeb Heel, Present

On the feet of just about every female celebrity in Hollywood, Christian Louboutin is credited with bringing stilettos back en vogue during the '90s. Noted for their iconic red soles, the "Louboutins" (pronounced: loo-boo-tan] have become a status symbol. The shoe designer also introduced an element of sex into the heel, creating shoe décolleté, or toe cleavage, and created über-high stilettos that often reached over 4 inches. Tough to walk in? Christian Louboutin does not care — beauty triumphs the pain! And truthfully, we'd hobble around any day in a pair of those skyscraping stunners.

This content is created and maintained by a third party, and imported onto this page to help users provide their email addresses. You may be able to find more information about this and similar content at piano.io
Advertisement - Continue Reading Below
More From Fashion
What Joey Wölffer Wears to Work
The Best Watches Seen at Watches & Wonders 2021
Advertisement - Continue Reading Below
Madewell's Spring Sale Is Giving Me Life
How to Make Biker Shorts Fashun
Fine, Rihanna, I'll Buy a Leather Blazer Too
Bella Hadid Wore Low-Rise Von Dutch Jeans
These Celeb-Loved Leggings Are on Super Sale
Small Business Spotlight: Pura Utz
Meghan Markle's Go-To Sunglasses Are in Stock
Stylish Bags That Actually Fit Your Laptop