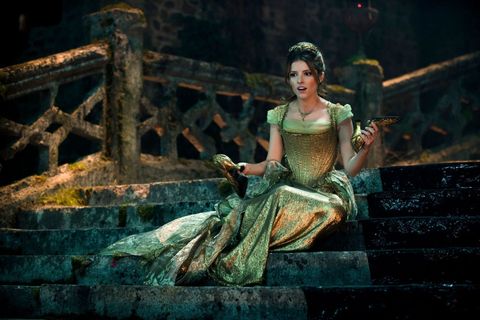 While it honestly seems that most things these days can be credited to Kim Kardashian, the corset—or as she prefers to call it, the "waist trainer"—has been gaining in popularity over the past months regardless of her endorsement. I'm actually wearing one as I type this very sentence.

From actress Jessica Alba (who said she wore a double corset to get back her infamous abs after giving birth) to the book Victorian Secrets: What a Corset Taught Me About the Past, the Present, and Myself (author Sarah A. Chrisman reveals she lost 10 inches from her waist, experienced fewer migraines, and developed better posture) to Anna Kendrick (who, despite having said she nearly fainted from running around in a corset on the set of new movie Into the Woods, looks enviably spectacular), it appears that the whittling tool might be even better than the 18th century led us to believe.

Actually, women in Columbia have been using it for years (they call it a "faja," another word for a girdle), the NewYork Times reported in 2012. All in search of better posture, tighter stomach muscles, and fat loss.

I decided to try it for myself. With a plethora of modern options on the market (HourglassAngel is the brand Kardashian prefers), it's not hard to find an affordable version to experiment with. And honestly, I have to tell you: For a girl in the office, the corset is magic. It instantly corrects your posture so you can't slouch back into your chair, it defines your waist like Spanx, and it holds in your stomach muscles—so it's almost doing the work of a plank for you.

Made from latex (there is no metal or whale bones in these versions), it does, believe it or not, move easily when you bend over. The other benefit? With a slimmer midsection and better posture, you get an instant boob lift, too.

The downside is that this is not a one-time benefit situation. In fact, it's advised you wear the trainer for up to eight hours a day, even when you're working out. It's also suggested that you eat smaller portions of food, which is less annoying than it sounds: The corset is restrictive on your stomach, so you'll feel full quickly and require smaller meals throughout the day.

Ultimately I'm tempted to say it's a cinch—but I'll leave the puns to another writer.