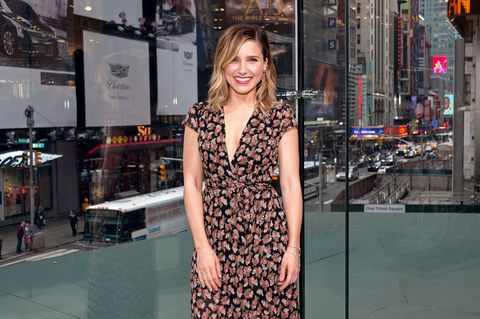 To know Sophia Bush isn't just to know a drop-dead gorgeous, crazy-talented actress, but also a steadfast activist, who at any given moment is helping more causes than you can count on one hand. If you don't believe us, look no further than her Twitter feed.

Being that green-living is one of Bush's greatest passions, it came as no surprise to us that she's teaming up with EcoTools for their Live Beautifully, Give Beautifully initiative. As part of the campaign, the eco-conscious beauty brand will donate $1 to Global Green USA (up to $100,000) for every makeup brush sold in their new EcoTools Complexion Collection. (As if that's not enough of an incentive, let us remind you that these brushes are made using renewable, recycled, and cruelty-free materials.)

Because it's Earth Month and we just want to breathe the same (fresh) air as Bush, we chatted with the star about her eco-friendly beauty tips, how she became so environmentally conscious, and, of course, her kick-ass role on Chicago PD.

What are your favorite eco-friendly beauty hacks?

"Avocado oil is an amazing makeup remover and really nourishing for your skin. Coconut oil is really, really good for you hair and you don't have to worry about all the chemicals you're washing down the drain and into the water system. For me, it's really been about finding things that I know aren't going to further pollute the world around me. RMS makes some really beautiful natural products—their concealer is amazing. TART does some great stains and they are very environmentally conscious. It's about just doing the research and finding the stuff that makes you feel just as happy, and just as put together, when you're all done up, but you know you can also feel good about it."

What are some other environmentally friendly habits you've cultivated?

"One really effective change that I've made is just making sure I have a reusable bag in my car or by the door, so when I go to the grocery store, I'm not coming home with bags that are single use and then have to be recycled. It's such a waste! I also try to carry a glass water bottle with me so I can fill it up all day and not go through eight plastic bottles a day while I'm on set or traveling. You know, were humans, and sometimes and it's unavoidable, but I do make sure that if I have to buy a bottle of water somewhere, I carry it with me so I can put it in a recycling bin so that I don't have to throw it away. I'm like the crazy person who snatches them from other people too. It's also about adjusting your thermostat to have your apartment be just a little warmer in the summer and a little cooler in the winter. You know, that stuff makes a difference."

"I've worked with Global Green for years and I've been on the ground with them after a lot of environmental disasters and in a lot of cities where they're trying to make a difference. I believe in what they do and with work, obviously I spend a lot of time in a makeup trailer. When Global Green said they're working with EcoTools, I jumped at the chance to help. I'm always drawn to companies that want to be an example simply by doing. You know, a lot of people talk about what they want to do, but putting a plan into action is different. I've been on the ground with these guys and I know what that money can do, so it just kind of felt like the most perfect marriage of work and my personal passion."

What's made you so passionate about helping the environment?

"I think it was growing up in SoCal. I spent all my free time in the ocean or hiking in the mountains, so there's nowhere that I feel better or more grounded than when I'm in nature. It's a very deeply rooted human connection—we are better when we can touch, smell, and see the earth. When you start to think about what you want your life to look like, and what you want your children's and their eventual children's lives to look like, you don't want it to be WALL-E—living on spaceships in floating chairs. I want my grandkids to be able to swim in the ocean and to know what lions are—not read about what lions once were. Truthfully, it's about our own self-preservation as much as it is about preserving the earth."

In what ways does being a celebrity help and hurt your activism?

"As a celebrity, you have a substantial platform, but you have to make sure that platform understands that side of you. I didn't start tweeting just to tweet. I started tweeting when I was on a Global Green trip to the Gulf Coast after the Deepwater Horizon oil spill. That's what got me on social media and I have an audience that's hyper aware and knows that they can trust me. However, as your audience grows, you certainly have people who aren't aware of who you've always been and you'll get comments when you're talking about politics. People will say something along the lines of 'Oh, you're just an actor, what do you know?.' You have to laugh it off. I think, 'Well, I'm spending time on Capitol Hill listening to Senate hearings and on the ground with the leaders of some of the best non-profits in the world—I actually know quite a lot.' It's not something you get paid to do. You do it because you want it and you believe in it. It's nice because it's who I've always been and what I was always doing, even as a kid, and now I just have a bigger megaphone with which to do it."

You play an awesome female character on Chicago PD—it's the kind of role actresses are fighting for more of in Hollywood. How does that feel?

"I'm really grateful to the writers of the show because I've never just wanted to play a girlfriend and they really wanted Erin to be this well-rounded, fully fleshed-out woman who is strong, capable, smart, and fearless, but also flawed and imperfect. Sometimes she screws up! She has a real past she's not this sort of squeaky-clean Barbie doll. I really appreciate it because we forget how much creating two-dimensional characters makes women believe they need to leave a two-dimensional life. So, fleshing out all the space between the good, the bad, the ugly, and the messy is what inspires me as an actor because I know that's what inspires the women who watch. The thing is, I can't play a person I wouldn't want to hang out with. So, I read scripts and I know very quickly whether or not this is something I'm interested in doing."

From One Tree Hill to Afghanistan: Sophia Bush

Meet the 20 Women Who Are Changing Your World

This content is created and maintained by a third party, and imported onto this page to help users provide their email addresses. You may be able to find more information about this and similar content at piano.io
Advertisement - Continue Reading Below
More From Fashion
The Caftan Dress: Your No-Brainer Summer Uniform
Rain Jackets That'll Make You Excited for Storms
Advertisement - Continue Reading Below
The Best Swimsuits, According to 100s of Reviews
Chunky Sneakers We Can't Resist
Floral Dresses You'll Wear on Repeat
Let Amazon Help You Figure Out Your Work Wardrobe
In Partnership with Amazon Fashion In Partnership with Amazon Fashion In Partnership with
Amazon Fashion
The Evolution of Royal Engagement Rings
Summer Hats to Fall in Love With
Celebs Wore THAT to the Airport?!
How Princess Eugenie's Wedding Dress Compares