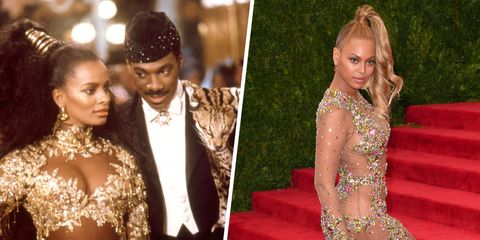 Both fashion and the Web love a good reference, though one's much more partial to cartoons and toys than "Bruno Mathsson and his summer homes Sodrakull and Frosakull." Below, we highlight seven of the cleverest and most spot-on comparisons.

1. Imani Izzi from Coming to America

What an honor to be photo framed next to my fav singer @Beyonce! That was 27 years ago for me & she's now! #METGALA2015

Next step: For Bey herself to annoint VBC her actual muse. Riccardo Tisci will do too.

2. All the characters in Mario Party

7 EPIC photos that prove Rihanna gets all her fashion inspo from "Mario Party" http://t.co/M3hOn1P15z pic.twitter.com/voVYK6jZaw

Okay, I really wish I'd thought of this. (See further evidence here.)

Tacked to Rihanna's moodboard: a pineapple under the sea, the secret recipe for Krabby Patties, because she would be the one to have it.

4. Syndrome from The Incredibles

Edna Mode would *not* approve of that cape.

She was the colonial one, remember?

Albert Einstein got a lot of girls back in the day, and furry Simon Rocha-like slippers was apparently how he did it.

From Marilyn Monroe to Elizabeth Taylor, An Old Hollywood Guide to Dressing Down

The New Dandy: 16 Tomboy Style Icons That Inspire Us

25 Most Iconic Film Looks of All Time