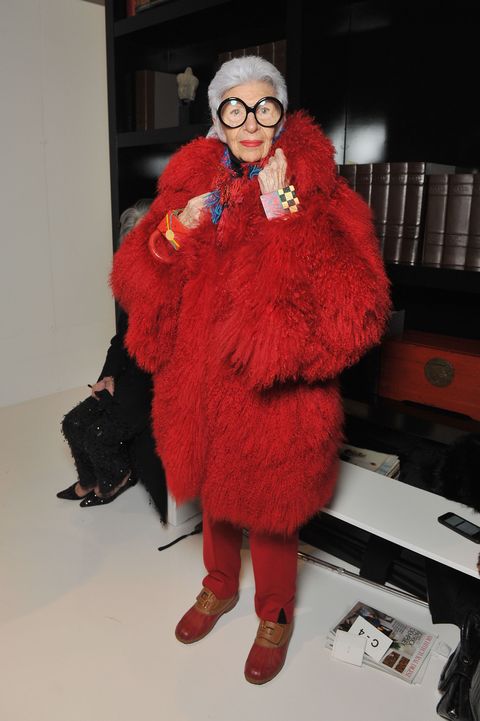 Kind of like how God helps those who help themselves, Iris Apfel is not here for your needy questions about The Official Iris Apfel Way of Developing Your Own Spot-It-From-a-Mile-Away Personal Style. (We asked anyway and got burned, as you shall see. It was worth it.)

In honor of her eponymous documentary, out now on Blu-ray and DVD, we sat down with the 94-year-old fashion icon and spitfire to talk dressing as self-discovery, how social media is making us all look the same, and her take on "handsome young fellow" Kanye West's presidential bid. Fasten your seat belts—it's going to be a bumpy ride.

Marie Claire: A lot of young women admire you for your clarity of voice and the way you dress and live. How did you get to be that way?

Iris Apfel: There's no formula. I had to be my own person and live my own life if I wanted to be happy, and I just did it. I mean, you need a certain amount of strength and courage of your own convictions, but what else can I tell you? There's no magic formula. People can do it, and some people can't.

"I am not going to spend my life living in somebody's image of what a certain person of a certain class of a certain age is supposed to do."

MC: Would you say you discovered that at a young age and maintained it?

IA: I came home from school one year—I guess I was 19—and my mother was in business, and my auntie said she was going to look after me and teach me how to be a lady. Everything she wanted me to do I found obnoxious, and it culminated when she said I had to learn how to play bridge. I don't like to play games. She said to me "Well, you're going to have to learn," and I said "Why do I have to learn?" And she says "Because what the devil will a hostess do with you if you can't play bridge?" I said "Well, hostesses like that I don't care to have."

MC: What sorts of things do you do and look at to stoke creativity and your imagination?

IA: I don't think about things like this. I just do them. When you think about them and when you plan about them, you get very uptight. That's not me. I don't live by any formulas or any rules and I can't give you any—if you're looking for that, I'm the wrong person. I'm afraid I can't give it to you. I do what I feel like doing if it's appropriate and it's proper, and if it isn't, I don't do it.

MC: Is that something you apply to the way you dress? You do what feels right?

IA: Yes, I have no rules—I try things. I have ideas that I think might be amusing and I try them, and if they look right, I carry them out, and if they don't, I throw them out and try something else. I don't agonize about it.

MC: So how long does it take you to get dressed in the morning?

IA: Sometimes two and a half minutes—I don't spend my life getting dressed! I have to put clothes on during the day; I don't get dressed up at all when I'm working. I'll wear jeans, or something very simple.

"Why do people want roadmaps to everything? Can't anybody figure something out by himself?"

MC: Going back to something we touched upon, you said you didn't want to live in someone else's image. You appear in a lot of pictures and fashion—so much so that your look has been part of the iconography—so what is the message you want attached to your image?

IA: I don't want to attach any legacy—that's for other people to do. I'm not out to preach. I just live my own life. I'm very happy if I can help somebody—that's wonderful. But it's up to them what they want to think about it or what they want to take away; it's their business, not mine. Tell me something: Why do people want roadmaps to everything? Can't anybody figure something out by himself?

MC: It's because they want advice from someone who seems to have already figured it out.

IA: But I didn't figure it out. It just is. I never sat down and figured it out.

IA: Well, I'm happy if I can help anybody. I'm more than happy to, but you have to find your own path.

MC: How about this? On Instagram, you see a lot of images—

MC: With social media and seeing the same kinds of pictures over and over, do you think that contributes to homogeneity among the way people dress?

IA: That's because they're copycats. Nobody wants to think for themselves anymore. If Kim Kardashian or somebody the press is idolizing at the moment does it, they do it. They think it's great. I don't comment about what people wear."

MC: Could we talk about your history as a White House decorator? In a clip from your documentary, you meet Kanye West. He recently announced that he's running for president—

IA: Who's running for president?

MC: Just for fun, if he were to win, how would you decorate the White House for him?

IA: The White House is the people's house. When you do historical restoration, that must be what it is. If you're the president, you live upstairs; up there, you can do whatever you like, and I wouldn't have a clue about what to do for Kanye West. I don't know him, I don't know how he operates, and it's something I don't think I have to worry about because I don't think that's ever going to happen.

Chelsea Peng I'm Chelsea Peng, the assistant editor at MarieClaire.com.
This content is created and maintained by a third party, and imported onto this page to help users provide their email addresses. You may be able to find more information about this and similar content at piano.io
Advertisement - Continue Reading Below
More From Fashion
The Most Iconic Shoe Moments in Film
How Princess Eugenie's Wedding Dress Compares
Advertisement - Continue Reading Below
Meghan Markle's Life in Photos
The Evolution of Engagement Rings
Ballet Flats Aren't Just for Audrey Hepburn
Black Turtleneck Outfits to Pin to Your Mood Board
Meghan Markle Wears Armani for Her Oprah Interview
The Chicest Golden Globes Looks From IRL and Home
Score Meghan Markle's Bling at Missoma's Sale
It's Time to Get Familiar With the "Shacket"