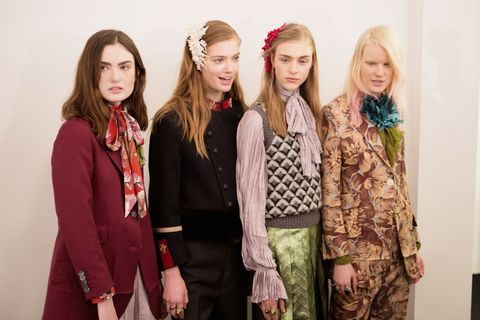 When Diana Vreeland said pink is the navy blue of India, she did not know that half a century later, fashion would be gradually trying to make that sentiment ring true for all the countries. This is a worthy crusade because 1) everybody looks better/healthier in pink (why do you think they use pink light bulbs for mood lighting?) and 2) it is scientifically proven that fuchsia shirts with sleeves as wide as dinner plates can prevent SAD. "But it's too twee for me," you protest. Not if a tough woman's wearing it.

Attn: This is different from home clothes, i.e., the intramural ultimate Frisbee T-shirt and spider-web sweats you bum around in on weekends. The ultra body-con stuff I see when I go outside could come from a place of insecurity ("The smaller the size the better, F vanity sizing") or confidence ("I did 500 legs lifts a day for these Beyoncé thighs"), but you know what projects 100 percent, Grade A self-assurance every time? Huge pants that billow in the wind. Worn with a robe coat. Again, this is not an XXL fisherman's sweater—it has to be considered. That in itself is another sartorial thing more people need to do: Think.

The second nicest thing anybody has ever said to me was that I have a very Chanel vibe. Do you know why she said that? Because I had the top one-third of my hair up with a black satin ribbon around it like Sam McKnight did for the models at the house's Salzburg show. Seriously—a nondescript bobby pin holding your bangs to the side (Dior couture) or a fancy barrette on either side (Gucci) can render the rest of your outfit void in the best way so that it's more about you, not only the clothes.

Before one of our more close-minded Facebook fans jumps in: Yes, I am very much in control of all my mental faculties, thank you. For Restless Sleepers and Olivia van Halle and countless others are trying to make sleepwear-as-streetwear a thing, and by god, they're succeeding. The image of a silk-turbaned, Verdura-cuffed doyenne who has a holder for her unlit Gauloises is so seductive it pretty much sells itself. The literally rolling out of bed part doesn't hurt either.

I just read a book in which a dude's alibi for murder is a girl wearing a party dress and drinking Champagne from the bottle at 6 a.m. In the end, she was a prostitute hired to distract him, but that's beside the point—the point is are you the kind of person who celebrates the everyday instead of just the particular times our culture mandates? Real studies (not the kind I do) have shown that the more you wear something, the less you like it, but life's simply too short to save your sequins.

Chelsea Peng I'm Chelsea Peng, the assistant editor at MarieClaire.com.
This content is created and maintained by a third party, and imported onto this page to help users provide their email addresses. You may be able to find more information about this and similar content at piano.io
Advertisement - Continue Reading Below
More From Fashion
What to Buy From Madewell's Secret Stock Sale
Biden's Grandkids Stun In Glamorous Looks
Advertisement - Continue Reading Below
Your Girlfriend Will Approve of These Chic Gifts
The Softest, Coziest, Warmest Socks You Can Buy
Why Everyone Wore Monochrome to the Inauguration
See Kamala Harris's Sequin Inaugural Concert Look
Jill Biden Looks Chic at Inauguration Concert
An Editor's Review of the Chanel Boy Bag
Sacai Partners Up With Brooklyn Based Artist
Spring 2021's Best Trends: Bras, Cutouts, Florals