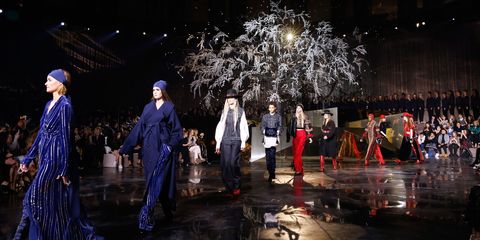 At the conclusion of every Paris Fashion Week—the final Fashion Week in our seasonal style trip around the world, from New York to London to Milan and finally Paris—the industry landscape becomes clear. There's always a handful of shows that make the most impact, and carry that buzz into the upcoming season.

This year, H&M took the prize for most relevant show at PFW; not only for highlighting racial and gender diversity, but for casting the most in-demand models, having a cover-girl-worthy celeb front row, and for continuing to push their designs to the next level under Creative Advisor Ann-Sofie Johansson.

Here, the four reasons your go-to brand has become a force to be reckoned with in the high-fashion space.

After hundreds of shows this fashion season, the lack of diversity continues to be at the center of conversation. Not only did H&M embrace racial diversity with a wide spectrum of ethnicities represented at their PFW H&M Studio AW16 show, but they also showcased models of all sizes and ages as well as gender representations. Plus-size model Ashley Graham, currently on the cover of Sport's Illustrated's annual Swimsuit Issue, walked the show in a flowing black button-up dress with red accessories. Mother/daughter model team Pat Cleveland (who, fun fact, is 65 years old) and Anna Cleveland also made their debut walking in the same show together. Transgender models Hari Nef and Andreja Pejic also amped up the diversity quotient. Ultimately H&M offered what so many readers and consumers want: models who represent who they really are, whether that's in terms of race, age, body, or gender. A true representation of women.

It may come as a surprise to anyone who's more used to shopping their racks than seeing their shows, but H&M had one of the most heavy-hitting model castings this fashion month across New York, London, Milan, and Paris.

Imaan Hammam (pictured left), Vanessa Moody, Devon Windsor, Jourdan Dunn, Soo Joo Park, Linsiesy Montero are some of the most in-demand runway models, and they were all there, joined by legends Amber Valletta, Natasha Poly, and Anja Rubik. Newcomers made their mark, too: Taylor Hill, Frederikke Sofie, and Damaris Goddrie rounded out the casting list.

Not all of the action was on the runway thanks to a particularly star-studded guest list. (As you know, every designer wants stars seated front-row—camera flashes for all—but it's the true Big Deal Brands that can get a whole flock together.)

Former Marie Claire cover girls Suki Waterhouse and Emma Roberts chatted together before the show started and were seated next to Emma Roberts, Atlanta De Cadenet Taylor, and Ciara—fashion's current It girl. A powerhouse display of young fashion plates.

The show's theme drew on the Swedish background of Creative Advisor Anne-Sofie Johansson. Pieces were rich in detail and embellishments, focusing on tailored pieces with Swedish folkloric influences.

Anne-Sofie describes the collection as having "a new femininity" all about "female strength and power, with a fresh look at folklore and romance." (Something I can get behind.) Textures of wool, lace, velvet, shearling, and silk were all used together to bring a sense of Swedish heritage and glamour to the mix.

My favorite pieces were embellished with silver chains embroidered together to make patterns while also sometimes left loose to create movement when walking. An extreme gaucho hat completed almost every look, matched with cowboy boots in a variety of fabrics.

Most eye-catching were the python-printed boots, which are sure to be a sell-out once they hit stores in six months.

There was so much variety in this collection—from pinstripe suiting pieces to blue velvet oversized separates to lace tops in a variety of cuts to shearling coats I'm still dreaming about.

The H&M Studio AW16 line goes on sale in September, and just like the finale at their Paris Fashion Week show, I'm sure it will have us all applauding at the check-out line.

Anne-Sofie describes the collection as having "a new femininity" all about "female strength and power, with a fresh look at folklore and romance."