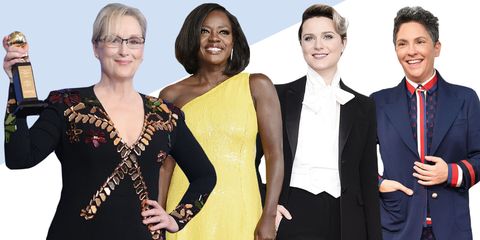 In times of war or depression, we can always count on the movies to give us a song and a dance to forget our troubles. With the fashion at Sunday's Golden Globes, Hollywood continued that tradition of escapism but delivered a performance that was both about maintaining an illusion of happiness and actively protesting the harsh reality we might soon face.

You might have expected a somber affair, maybe a shroud here or there, but even one of the darkest dresses of the night—Teresa Palmer in plush Armani—was midnight blue. (Whereas Amy Adams' anthracite Tom Ford actually sparkled.) And amongst lashings of Easter Sunday lilac, the colors of the night were cheery yellow and pink, which together, perhaps reflects millennials taking pale, "girly" shades and severing them from their historical associations of gender. But there was still a sense of gravity, even though the gowns were maybe only a bit more extravagant than usual—you got the feeling the attendees knew the public needed that old Hollywood razzle-dazzle to twinkle harder than ever before, like a star does before it dies. This was a crowd putting on its bravest face.

But then—then you had a suit, worn by Evan Rachel Wood to show girls they aren't limited to skirts, a decision she explicitly announced to Ryan Seacrest. You had Lola Kirke's unshaven underarms and a "F*ck Paul Ryan" pin affixed to the bodice of her floral Andrew Gn. (Truly groundbreaking.) You had Chrissy Metz, who, in a turn of events, passed on two gowns, when before, she might have had none to pick from. And you had Transparent actress Trace Lysette, who underscored the evening's theme of freedom just by being a young woman thrilled to wear emerald Charbel Zoe to her first Globes. In the fashion itself, and in the words some wearers used to explain their meanings, you can see so many half-steps of choice: femininity presented as Jill Soloway in a Gucci pajama suit or Sofia Vergara in a lacy, busty Zuhair Murad.

"The public needed that old Hollywood razzle-dazzle to twinkle harder than ever before, like a star does before it dies."

It was a night of women in pretty, soft dresses saying sharp words—women who know that the right clothes can magnify their own power. But the sharpest of them all wore a relatively plain gown to deliver a speech that would have gone down as the most elegant character assassination in history, if it weren't completely true. Donald Trump, Meryl Streep said, her grieving-hoarse voice gaining clarity, lacks humanity.

It might not be fashion, exactly, that he will take away with his indecency. But it is liberty and the pursuit of happiness—unalienable rights our clothes can sometimes symbolize—that are in danger. As Streep said, these are the things we must protect. This is why we fight.

This content is created and maintained by a third party, and imported onto this page to help users provide their email addresses. You may be able to find more information about this and similar content at piano.io
Advertisement - Continue Reading Below
More From Best of the Red Carpet 2021
Alan S. Kim Channeled David Rose at the Oscars
The Best Red Carpet Looks at the 2021 Oscars
Advertisement - Continue Reading Below
The Best-Dressed Celebs at the 2021 SAG Awards
The Best Red Carpet Looks at the 2021 Grammys
The Chicest Golden Globes Looks From IRL and Home
50 Celebrities on Their Very First Red Carpet
The Best Looks of the Oscars After-Parties
Did You Spot Charlize Theron's Hidden Hair Detail?
Timmy Photobombed Margot on the Oscars Red Carpet
Leonardo DiCaprio's Oscars Date Is...Not His Mom