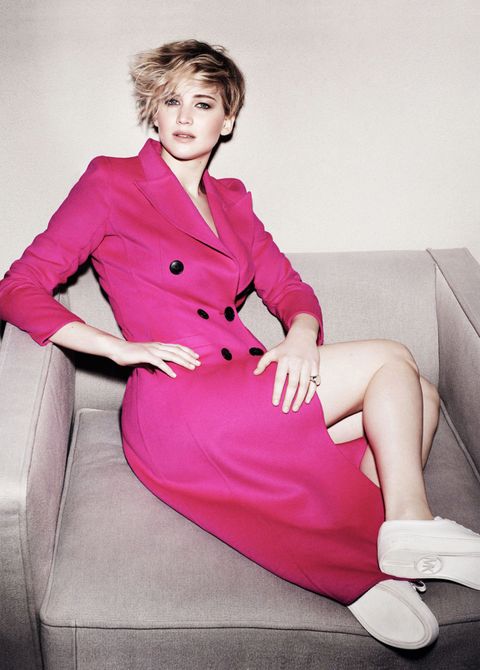 Update, 1/8: What was reportedly an innocent pre-New-Year's sushi dinner between Jennifer Lawrence and Chris Martin might actually have been a date in a string of romantic outings that was never actually broken, People reports.

The "solid" twosome, last seen together Dec. 30, "are still dating and have been dating," a source tells the mag, despite rumors of their separation and the presence of a bearded pizza enthusiast in Lawrence's life.

We suppose we'll take this as our cue to fire up the ol' couple-name generator—you can never be too prepared when it comes to portmanteaux, right?

Update, 11/4: Jennifer Lawrence and Chris Martin may have rekindled their short-lived romance. The pair were seen together at Martin's house on Oct. 27 (the same day that sources confirmed the split) and then again three nights later, People reports. There may just be hope for the unlikely duo yet.

Their unexpected romance started in June after Lawrence ended her four-year relationship with Nicholas Hoult and Chris Martin and Gwyneth Paltrow "consciously uncoupled." Though it seemed like a classic case of hot celebrity blondes on the rebound, we had started to grow fond of the new duo. She'd go see him in concert, he'd do a bunch of crazy things to get her attention, and she even met his grandparents!

Oh well, folks. Another celebrity couple bites the dust. At least we didn't waste our time on clever names for their relationship. Like Chennifer. Or C. Lawr.

This content is created and maintained by a third party, and imported onto this page to help users provide their email addresses. You may be able to find more information about this and similar content at piano.io
Advertisement - Continue Reading Below
More From Fashion
The Best Watches Seen at Watches & Wonders 2021
Madewell's Spring Sale Is Giving Me Life
Advertisement - Continue Reading Below
How to Make Biker Shorts Fashun
Fine, Rihanna, I'll Buy a Leather Blazer Too
Bella Hadid Wore Low-Rise Von Dutch Jeans
These Celeb-Loved Leggings Are on Super Sale
Small Business Spotlight: Pura Utz
Meghan Markle's Go-To Sunglasses Are in Stock
Stylish Bags That Actually Fit Your Laptop
Investing in New Jewelry? Try One of These Brands