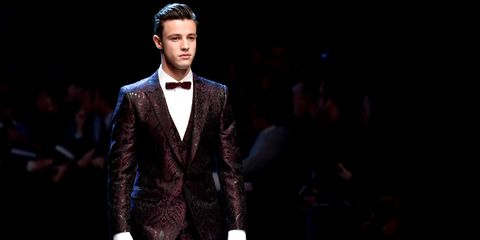 Dolce & Gabbana has made a habit of courting and catering to the 20-something crowd over the past several seasons. The Italian fashion house routinely hosts the hottest It girls and guys in its front row at Fashion Week, and fills its model lineup with of-the-moment #DGMillennials. The Fall 2017 men's show that took place in Milan this weekend was no exception.

The theme of the collection was royalty, and the clothes (and models) were as regal as it gets. Click through to see all the looks from Dolce & Gabbana's epic runway show.

Getty Images
30 of 113
Next
Taylor Swift Looks Chic In NYC
Advertisement - Continue Reading Below
This content is created and maintained by a third party, and imported onto this page to help users provide their email addresses. You may be able to find more information about this and similar content at piano.io
More From Fashion
Ballet Flats Aren't Just for Audrey Hepburn
Found: Long Pendant Necklaces You'll Wear Forever
Advertisement - Continue Reading Below
Irresistible Camisoles to Work Into Any Outfit
What to Wear This Summer
Meet Your New Daytime Bag: The Clutch
Khaki Pants Will Be Your Go-To Summer Trousers
Meghan's Sunglasses Are On Sale for Prime Day
Fashion Line Christy Dawn Designs for Mother Earth
Found: The Best Fashion Deals on Prime Day
27 Early Amazon Prime Day Deals to Shop