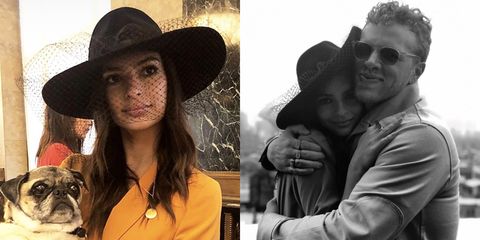 Emily Ratajkowski's surprise announcement, that she'd just gotten married to her boyfriend of a few weeks, Sebastian Bear-McClard, was met with excitement from her fans.

To break the news, Ratajkowski shared some sweet wedding snaps on Instagram, which revealed that she'd worn the cutest mustard pantsuit at her wedding. But the best news of all is that her suit is from Zara, and the two-piece retails for around $200.

As the model and actress chose the striking suit for her nuptials, it's highly likely that the items will sell out quickly. But for now, at least, both the vintage-inspired flared pants, and the long belted jacket, are available on Zara's website. While the pants retail for $69.90, the jacket is listed for just $129.

Ratajkowski's choice of wedding outfit might have bucked tradition but, as usual, the model looked completely flawless. She accessorized the eye-catching suit with a black wide-brimmed hat, with a small veil attached, which will be total inspiration to anyone currently planning their own nuptials.

The Gone Girl star announced her wedding in her Instagram story yesterday with the caption, "Soooo I have a surprise. I got married today."

According to reports, Ratajkowski quietly split with her longterm boyfriend Jeff Magid, and started seeing Bear-McClard sometime in 2018. They were spotted together for the first time in February following a dinner date in California.