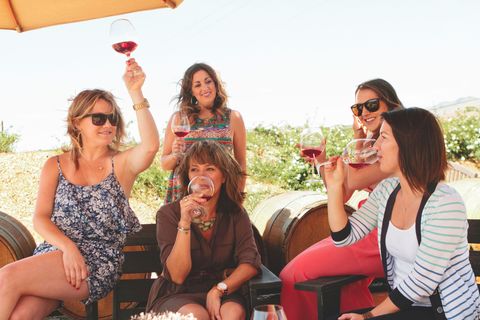 If you're like me, you had your first sip of wine at some family celebration, where it puckered your face and burned your throat. Then came the Wine Wednesdays of college, where you gulped indiscriminately from Solo cups. Eventually you got to—or are getting to—the point where you want to be able to bring a bottle to a friend's party without worrying that you just paid for grape-scented vinegar water.

With that aim in mind, I recently attended grape camp in Sonoma, California. Is there a more beautiful concept? Doubt it. It was three days of vineyard tours, grape-picking, food-pairing, and naturally, a whole lot of drinking/trying not to be hungover. Here are a few lessons I picked up along the way, for the next time you're staring down an aisle of identical bottles:

The first rule of wine is to forget all the rules.

White wine with chicken and fish, red wine with red meat? White in summer, red in winter? The more expensive, the better? You may have absorbed these guidelines somewhere along the way, but they're not law. It's not some enormous social gaffe to break them.

Wine doesn't need to be nearly as snobby as it seems. Drink what you like, when you like it, with whatever food you want. After seminars and classes in the stuff, I still left camp loving really bold, bright reds, the kind that knock you back in your seat. I still think most fancy whites taste like hay. Wine sophistication isn't a ladder that you climb.

No one stomps grapes anymore.

Whoops. I assumed this would be a basic (if tourist-y) part of grape camp, but there was nary a Lucy-and-Ethel moment to be found. We did squish bunches with our hands, and drank the resulting juice. It was unbelievably delicious, and I'm never touching concentrated, bottled nonsense again.

It's possible to drink 25 glasses of wine in a day and live to tell the tale.

Throughout camp, we were served our first glass of the day around 8:30am, and kept at it for the following 13 hours. At two per hour or so, I was never super drunk, but I did float among the wines on a purpley cloud. No one stomps, but no one really spit out their mouthfuls in order to keep their palates pure, either.

All that wine does weird things to your pee, teeth, tongue, and anything else that stains, though. You've been warned.

In chatting with vintners, chefs, and vineyard owners, they'd ask if I'd ever visited the area before. "Have you ever been to... Napa?" they'd whisper, as if assessing my predilection for kicking kittens. To borrow from T.Swift, I gathered that Napa is cheer captain and Sonoma is on the bleachers. So if you're looking to support the underdog, head slightly west in northern California.

Rolling hills, dappled sunlight, endless stripes of green vines—who knew that a pocket of Italy can be found in the United States? And for a cheaper plane ticket, too. Sorry for all the Instagrams, y'all, but man is it pretty up there.

Wine grapes have up to sixteen times the amount of sugar as the grapes you buy in the grocery store.

We could walk right up and pluck them off the vine, and those surprisingly gorgeous indigo or golden jewels tasted like candy. That's one of the many reasons why you probably shouldn't try fermenting grocery-store grapes in your basement.

Pairing is more intuitive than you think.

For all the delicate, carefully chosen food-and-wine partnerships I consumed, the choices most often came down to choosing an accent mark. You know how you take a patterned skirt (or couch) and then choose an accessory (or pillow) that pulls out one of the colors of the pattern? Same thing with wine.

Again, the TL;DR version of that concept is to find pairings that make both the food and the wine more interesting.

Anyone who's ever found themselves accidentally wearing pink on Wednesdays knows that movies have a way of sneaking into our subconscious. For the American wine industry, it was the 2004 film Sideways that boosted the area in many ways and hurt it in others. Paul Giamatti's character loathes merlot, and sales of the red stuff tanked soon after. It's taken a decade for merlot to leave the grape dog house.

Barrels are as fancy as it gets.

You know those menus or labels where a wine is said to have an elegant bouquet of sun-ripened grass with a finish of leather (or some such)? All those bizarre descriptors come from the choice of wood in the barrels that house the wine before bottling.

Not just any wood will do, of course—winemakers set themselves apart with the provenance of their oak (French, Italian, American?), the age of the wood, the size of the barrel, the way the grain grows. This is where the nerds get really nerdy. It's also where neophytes wind up saying things like this:

Failure is not an option.

You may have heard that California is going through a bit of a dry spell. It's not hurting their wine industry, and indeed is even helping the vines, which benefit from having to fight for water. Every single aspect of a season's weather goes into the wine, and vintners make their mixes and choose their barrels based on how the grapes grew that year.

The whole you-take-the-good-you-take-the-bad-and-there-you-have-the-facts-of-life process makes winemakers very philosophical. George MacLeod, the nonagenarian patriarch of the MacLeod Family Vineyard, told campers that every rock, every rainstorm, every employees' mood and temperament, goes into that year's vintage. Which is why he insists that all his grape-pickers be Pollyanna types.

Sonoma is full of people who quit life.

Speaking of sweet old George, he is a dreamer who quit his job and purchased an abandoned, rocky field in 1974. Sonoma County was full of characters who ditched the 9-5 to spend their days walking the golden rows. I think they had the right idea.

You know more than you think.

Wine shouldn't be scary. It's fun! Drinking nothing but champagne doesn't make you an 18-year-old girl on New Year's. Pointing out the way the light streams through the crimson juice doesn't earn you a monocle. My greatest lesson from Sonoma was that I should trust myself and my palate, no matter how "developed" it is (or not). If everyone else adores some $72 wine and you think it tastes like nail-polish remover, you're not wrong.

Of course, the only way to figure out what you like and don't like is to sip and drink and tipple and sniff and swirl. Just don't aim for 25 glasses a day, unless you want to lose your job and liver and teeth.

Kaitlin Menza Kaitlin Menza is a freelance features writer.
Advertisement - Continue Reading Below
More From Food & Cocktails
The Delicious Drinks on Starbucks' Secret Menu
Be Fancy, Sip a Vermouth Cocktail
Advertisement - Continue Reading Below
The Tastiest, Fanciest New Year's Eve Cocktails
Elevate Your Next Toast With a Champagne Cocktail
91 Drinks to Get You in the Holiday Spirit
The World's Largest Starbucks Is Opening
Starbucks' Holiday Cups Are Back In Stores
Found: 12 Delicious, Affordable Champagnes
You Can Have Lunch At Lorelai Gilmore's House
The Best Vegan Wines to Indulge In, Guilt-Free