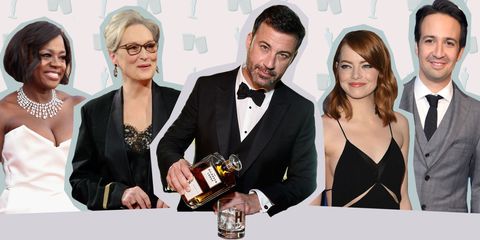 Happy Oscars night, everyone! If you're sitting down to watch the red carpet, get ready for a long ride. Still shorter than OJ: Made in America, but lengthy nonetheless. Plus lots more sparkles. Possibly fewer gloves. Definitely less sports.

So in the interest of keeping things entertaining, feel free to get wasted with this extra special, highly inclusive, Celebration of Diversity Oscars Drinking Game. Because even if the Academy doesn't recognize the role it's playing in perpetuating racism, misogyny, ageism (and several other problematic -isms), that doesn't mean you can't stand up and call it out. Assuming you can still hold yourself up by the end of this. Enjoy!

Take a sip whenever:

🍸 Someone wears Lorraine Schwartz, Tiffany & Co., Forevermark, Henri Bendel, or Fred Leighton jewelry. (This is just to get you to a nice level of tipsy early on.)

🍸 Someone attempts to make a political statement by sporting a safety pin. Drink while calling your senator.

🍸 A person of color is asked about whether this year marks the end of #OscarsSoWhite.

Take a shot whenever:

🍸 An actress wears flats. Two shots if they're back at it again with the white vans.

🍸 An actress speaks out about how it's 2017 and women have more to say than who designed their dress and yes, I'm very excited to be here and oh my god is that Meryl Streep?!

🍸 You question whether something could be considered cultural appropriation.

Take a sip whenever:

🍸 A winner inserts a last minute political statement in their acceptance speech as the music plays them off.

🍸 A woman rails against the patriarchy in a gown that restricts her movements.

🍸 Someone says men and women are equal, ignoring everyone who doesn't identify as part of the gender binary.

🍸 You get a message from one of your conservative relatives who thought La La Land was a lovely picture about a white man's struggle to bring jazz to the masses. 😐

Take a shot whenever:

🍸 Lin Manuel Miranda wins an Oscar and is crowned official EGOT recipient and leader of the free world, which to be honest, we're all pretty okay with. Take another shot when he says something beautiful and tear-jerking during his acceptance speech and the phrase starts trending on Twitter. Take three more shots when you see the phrase embroidered on a tote bag for sale on Etsy.

🍸 An award goes to someone who's been accused of sexual assault, anti-semitism, racism, or homophobia and you think, "This is why we can't have nice things."

🍸 Someone from The Academy praises themselves for having always honored the differences that make each and everyone of us unique. Bonus shot if they use the word "adversity." Two bonus shots if you see someone in the audience roll their eyes.

🍸 They show a clip of Moonlight and you spend the next five minutes crying.

🍸 Someone makes a joke about accidentally grabbing the Oscar by the pussy. Bonus shot if you think that joke is getting old.

🍸 The Salesman wins Best Foreign Film, yet Asghar Farhadi is still not allowed in this country because #immigrationban.

🍸 Someone makes a joke about how little the Oscars matter in the grand scheme of things, then awkwardly segues into presenting an award.

🍸 A segment features Jimmy Kimmel as an alien in Arrival, an ignorant white dude in Hidden Figures, or a literal fence in Fences.

🍸 Someone commits an an extreme error in judgement when they walk onstage dressed as Beyoncé from her Grammys performance.

🍸 A winner says they would split their Oscar statuette in half and share it if they could, but you know they're lying.

Note: This does not count as joining the resistance. You are merely getting drunk. See you at the next rally.