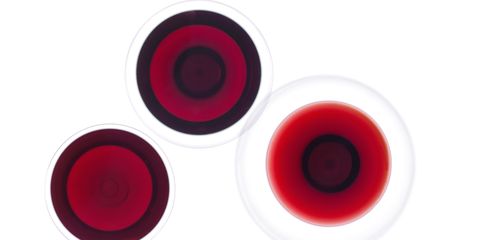 Here's a reason not to feel so guilty when you pour yourself a second—OK, fine, third—glass of wine tonight. According to a new study, there's a compound found in muscadine grapes (undoubtedly the most important of all the grapes because they're the kind used to make wine) called ellagic acid. But its name doesn't matter as much as what it does: That genius little chemical has recently been proven to boost the metabolism of fatty acids in liver cells. In other words, it'll improve your health and may even make you lose weight. Should we say that one more time? Drinking wine may make you lose weight.

That's not to say you should skip the gym to down a bottle of Merlot. Drinking wine won't cause you to magically shed pounds, but what it will do is boost your body's fat burning abilities and improve liver function, particularly in overweight people.

Sounds too good to be true, maybe, but it's not. Biochemists at Oregon State University fed one group of mice a typical mouse diet (which was not, we presume, lots of cheese) while another group was given a high-fat diet (so...lots of peanut butter?). The latter put on weight over a 10-week trial, obviously, but of that group, the ones who consumed grape extract had less fat in their livers and lower blood sugar than those who did not.

So next time you swing by the grocery store, grab a bottle of wine, because life's short and it's good for you. Science says so!

Cholesterol Is Officially Not Terrible for You Anymore