Today's Top Stories
1
Moving Forward: To Heal America, We Need the ERA
2
Matt James' 'Bachelor' Cast: Everything We Know
3
Teleabortion: A Bitter Pill
4
How Marie Kondo Does Self-Care
5
Listen to the Best New Love Songs of 2021 (So Far)
Getty, design by Dana Tepper

People contracting salmonella from eating raw cookie dough. Me getting asked out on dates. These are things that seem to happen *less* frequently than the Kardashians acquiring new, million-dollar real-estate holdings to add to their already-vast collection of million-dollar real-estate holdings. Here, five insights into their buying and selling patterns, or the counterintuitively nomadic way one of America's foremost families lives. 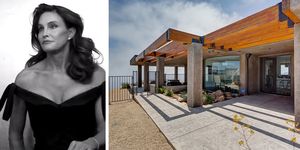 1. They don't just buy the house—they systematically buy up all the stuff *around* the house.

News flash: It may be 2016, but feudalism is still a thing. Soon after they scooped up a $21 million Hidden Hills mansion in 2014, Kim and Kanye reportedly spent $2.9 million for the four-bedroom ranch house adjacent to it. While they weren't exactly *displacing* anyone/letting them remain there only if they paid a tithe, they *were* buying up the surrounding land for 2.5 reasons: 1) more room; 2) so nobody unsavory could inhabit it (not that that would be easy in their neighborhood); and 2.5) because you can't put a price on privacy.

Architectural Digest once described the real-estate climate in the Kardashians' corner of Calabasas, California as "something of a celebrity swap meet," which is just so apt. Not only are famous people in this neck of the woods engaged in a game of musical estates—Kendall Jenner just purchased Emily Blunt and John Krasinski's 6.5 million home or when Khloé Kardashian bought Justin Bieber's Mediterranean Revival in early 2014—but they also like the *community.* (Including Lisa Marie Presley, Britney Spears, Ozzy and Sharon Osbourne.)

It's such a small world that Kim and Kanye and their realtor even live near one another.

3. They have houses, not homes.

When your life is so full of travel and promotional appearances that you likely wake up not knowing where you are, you don't get emotionally attached to brick-and-mortar dwellings—that's not good business.

As long as you've got a glam room, the rest doesn't matter.
thekyliejenner.com

This, of course, changes with marriage and children (Kourtney's pretty well settled, for example), but Kim and Kanye have been engaged in a cycle of buying, renovating, then dumping several "dream homes" for slim profits, before they've even gotten much use out of their $6,000 light-up sinks. Part of the reason is that they've got a high enough net worth to remain untethered to the world; the other part is that real estate is a hard asset that provides high return on investment. Sometimes, financial wins > a safe place away from the prying eyes of long-lens photographers who offer to drop you off anywhere you want to go. 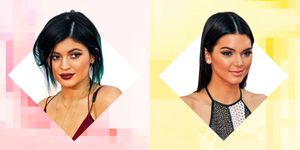 (Kanye is totally the boot, FYI.)

If we synthesize all the information above, the comparison rings even more true. We've got several players all trying to buy land in the most exclusive areas. These players then want to erect structures on the land, which they then combine into property conglomerates that make even more money for their owners. Unlike the game, though, you can't just flip the board when you're losing, but Kanye—even with his $53 million debt—doesn't seem to be anywhere near filing bankruptcy.

5. They don't venture more than a few miles from the Kardashian-Jenner Real-Estate Nexus.

Even though Kylie threatened self-harm if pregnant Kim were ever to stay with her, the Kardashians stick together—even in proximity. The #worldsmosttalkedaboutcouple lives five minutes away from Kris "I Was the Original Kardashian" Jenner. Kylie also recently moved to be closer to her mother and sister. And Khloé and Kourtney's addresses are so nearby they could walk around the corner to borrow cups of stevia.

The only thing that could make the Kardashian Real-Estate History more interesting is if Kim were to stop mansion-hopping and finally pick one property to turn into a modern-day Winchester Mystery House. All together now: "Oooh..."

Chelsea Peng I'm Chelsea Peng, the assistant editor at MarieClaire.com.
This content is created and maintained by a third party, and imported onto this page to help users provide their email addresses. You may be able to find more information about this and similar content at piano.io
Advertisement - Continue Reading Below
More From Home
Chic Online Floral Deliveries to Say "I Miss You"
Amazon's Slashing the Prices of Weighted Blankets
Advertisement - Continue Reading Below
15 Apps to Play With Friends That Aren't Lame
The Best Things to Buy From Nordstrom's Home Sale
How to Throw a Virtual Birthday Party to Remember
Say Au Revoir to 2020 and Shop Cute 2021 Planners
Board Games for Grown-Ups That Are Actually Fun
Our Favorite Coffee Table Decor Ideas
Turn Your Home Into a Spa With a Great Bath Towel
Level Up Your Next Zoom Call With a Fun Game