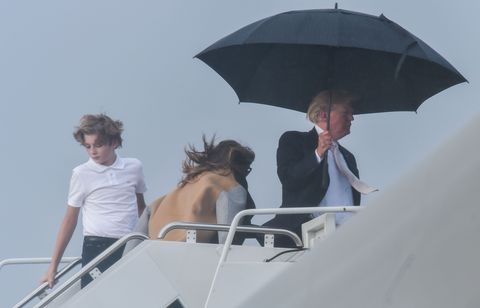 Today in "good lord what did he do this time?" President Donald Trump is being criticized for not holding an umbrella over his wife and son during a rainstorm, and instead hogging it all for himself.

POTUS, Melania Trump, and their son Barron were seen ascending the stairs to Air Force One, and not only did Melania and Barron not *have* umbrellas—Trump seemingly refused to share his in what was clearly bad weather. And, unsurprisingly, Twitter/the Universe was unimpressed.

Here’s Trump holding an umbrella over himself while boarding Air Force One with Melania & Barron, because his hair. pic.twitter.com/dsfKaNNd5U

Says a lot about a person. Trump holds an umbrella over himself and not his wife or son. pic.twitter.com/AMaIsWgvgU

There's speculation that Trump was trying to protect his hair from the elements, which, sure, but maybe not at the expense of his loved ones.

Related Story
Donald Trump Forgot Words to Our National Anthem
Mehera Bonner Contributor Mehera Bonner is a news writer who focuses on celebrities and royals—follow her on Instagram.
Advertisement - Continue Reading Below
More From Politics
Behind the Controversy at the Women's March
Women Are Not Granted Equality in the Constitution
Advertisement - Continue Reading Below
Electability Is About Us—Not the Candidate
Everybody Running for President In 2020
Time’s Up for Wall Street
Women of Color Ruled Last Night's Debate
Cory Booker, Rosario Dawson Are Traveling Together
Is Megyn Kelly a Feminist or What?
Door Knocking With Field Organizers in Iowa
“I Was Illegally Billed Seven Times for My Rape”