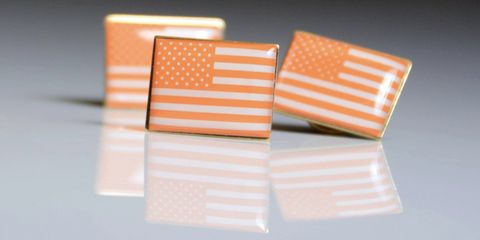 Following the success of the Time's Up pin, which attendees of the Golden Globes wore to raise awareness of women affected by sexual assault and harassment in any industry, people are choosing to wear a different pin to the Oscars. And the "Wear Orange" American Flag pins stand for an extremely important cause.

From the organization Everytown for Gun Safety, the "Wear Orange" pins have been created to "honor those who have been killed and to inspire action to end gun violence." Following the devastating school shooting in Parkland, Florida last month, celebrities are opting to give Everytown for Gun Safety a voice on the red carpet, to encourage crucial discussions about gun control.

The organization's website says, "We're in every state, every community, and every town and you can Expect Us on the front lines of every fight—whether political, electoral, or cultural—to make our country safer from gun violence."

You can buy your own "Wear Orange" pin from the organization’s website now, to show your support for Everytown's campaign to end gun violence across America.

Related Story
Parkland Survivors Call for a March on Washington

Celebrities have already been donating to March for Our Lives, the march set up by Parkland students following the tragic shooting at their high school.

Oprah announced on Twitter that she will be donating $500,000 to the march, matching George and Amal Clooney's donation.

Oprah wrote, "George and Amal, I couldn’t agree with you more. I am joining forces with you and will match your $500,000 donation to 'March For Our Lives.' These inspiring young people remind me of the Freedom Riders of the 60s who also said we’ve had ENOUGH and our voices will be heard."

Amy Mackelden Amy Mackelden is a freelance writer, editor, and disability activist.
This content is created and maintained by a third party, and imported onto this page to help users provide their email addresses. You may be able to find more information about this and similar content at piano.io
Advertisement - Continue Reading Below
More From Politics
Daunte Wright's Death Sparks Protest in Minnesota
41 Surprising Rules First Ladies Have to Follow
Advertisement - Continue Reading Below
Asian American Women on Where to Go From Here
Syrian Journalists Reflect on a Decade of War
How to Show Your Support for the AAPI Community
Activist Lydia X. Z. Brown on Disability Justice
Elisa Crespo: "I'm Not Here to Make History"
What We Know About the Georgia Spa Shootings
Dianne Morales Has Never Listened to the Naysayers
Stacey Abrams on Her Definition of Success