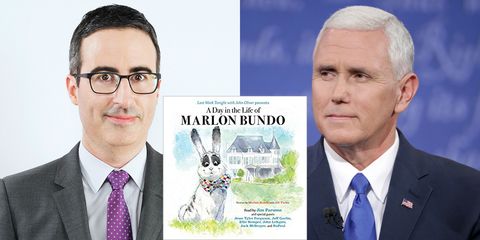 John Oliver has taken on Mike Pence in the best way, and he's already winning. Following news that the Pence family would be releasing a children's book inspired by their family's rabbit, Oliver has parodied the book with his own version, and within hours, it became a smash-hit. 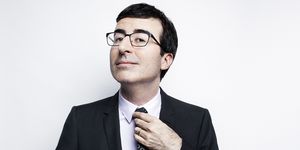 To recap—on Sunday, Oliver announced on his show, Last Week Tonight, that he'd be immediately releasing A Day in the Life of Marlon Bundo, a book about the Pence family's rabbit, with a twist. In Oliver's version, Marlon Bundo is gay.

Conversely, Marlon Bundo’s Day in the Life of the Vice President, is written by Pence’s daughter, Charlotte, and is illustrated by his wife, Karen Pence. Impressively, Oliver managed to beat the Pences to market, and outsell their volume.

Oliver pointed out the significant differences between his book, which is written by Jill Twiss, and illustrated by E.G. Keller, and the Pence family opus. As he revealed on his show, "Our story is about Marlon Bundo falling in love with another boy rabbit, because our Marlon Bundo is gay—just like the real Marlon Bundo."

Vice President Pence is known for his anti-LGBTQ stance, and famously said a in a 2006 speech (via TIME) that gay marriage signalled a "societal collapse," and that being gay was a choice.

As Oliver said about A Day in the Life of Marlon Bundo on his show (via Deadline), "Please buy it for your children; buy it for any child you know, or just buy it because you know it will annoy Mike Pence." 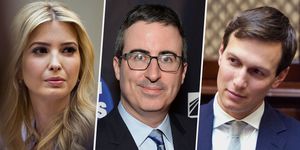 Watch John Oliver Eviscerate Jared and Ivanka
Amy Mackelden Amy Mackelden is a freelance writer, editor, and disability activist.
This content is created and maintained by a third party, and imported onto this page to help users provide their email addresses. You may be able to find more information about this and similar content at piano.io
Advertisement - Continue Reading Below
More From Politics
Senator Hirono on Her New Memoir 'Heart of Fire'
How to Demand Justice for Adam Toledo
Advertisement - Continue Reading Below
Daunte Wright's Death Sparks Protest in Minnesota
41 Surprising Rules First Ladies Have to Follow
Asian American Women on Where to Go From Here
Syrian Journalists Reflect on a Decade of War
How to Show Your Support for the AAPI Community
Activist Lydia X. Z. Brown on Disability Justice
Elisa Crespo: "I'm Not Here to Make History"
What We Know About the Georgia Spa Shootings