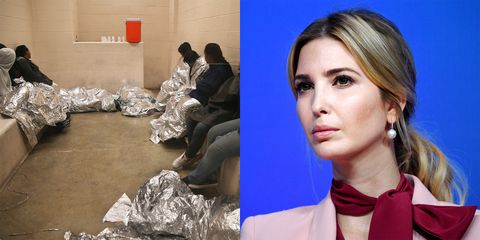 This week, people on Twitter are comparing a designer gown Ivanka Trump wore in January 2017 to the thermal blankets being handed out to detained immigrant children at the Texas border right now. Once again, the dress is serving as a symbol of the first daughter's detachment from the harrowing effects of her administration

Ivanka—who has stayed silent on her father's polarizing (read: inhumane) immigration policy despite being a senior advisor to the president—was criticized at the time for posting a photo of herself wearing the $5,000 Carolina Herrera metallic gown just hours after the president announced the "Muslim ban" in January 2017. She didn't caption the photo, but posted it the same evening that protests against the so-called "travel ban" were taking place at major U.S. airports.

This is in spite of Ivanka's purported support for human and women's rights.

Now, given the unprecedented events of the past week, her gown has once again become a symbol. This is thanks to comedian Orli Matlow (@HireMeImFunny), who wrote on Twitter:"Who wore it better: Children detained in McAllen, Texas or Ivanka Trump." She posted the comment next to a photo of detained children, ripped from their parents, sprawled out on mats with thermal blankets.

Who wore it better: Children detained in McAllen, Texas or Ivanka Trump pic.twitter.com/atifVrteeY

The Tweet has inspired a series of memes and reactions, many of which questioning why Ivanka has remained silent.

Who wore it better? Is the Mylar blanket from the Ivanka 2018 Complicit collection? pic.twitter.com/UcgeqYDAki

@IvankaTrump So nice of you to donate that silver dress of yours to help keep the refugee children your father imprisoned warm. Your kids must be SO proud of you. pic.twitter.com/PJMcxnNCTN

The jury is out on whether or not Twitter could inspire Ivanka to speak out—considering her track record has proven her to be ineffective, the chances are unlikely.

To find out how you can help immigrant children separated from their families, click here.

Ruby Buddemeyer Beauty Editor Ruby is the beauty editor at Cosmopolitan, where she covers beauty across print and digital.
Advertisement - Continue Reading Below
More From Politics
Marie Claire Wants You to Vote
The Ecowarriors Greenifying Big Tech
Advertisement - Continue Reading Below
Who Is Andrew Cuomo's Ex-Wife Kerry Kennedy?
How Planned Parenthood Is Responding to COVID-19
British PM Boris Johnson Has Coronavirus
Fear Is a Virus
COVID-19 Exposes the Dangers of Gender Inequality
“I’m Homeless—How Can I Self-Quarantine?”
Will the Conventions Be Canceled in 2020?
Rep. Katie Porter on Being an Effective Politician