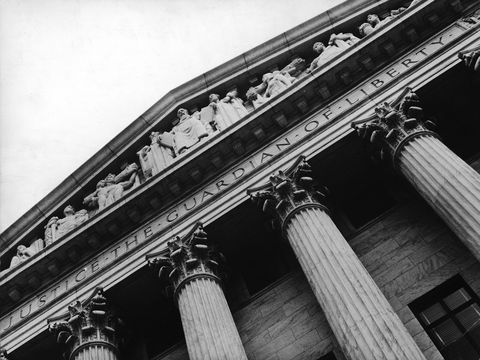 That sound you hear is anti-choice activists howling with joy. With the imminent departure of Justice Anthony Kennedy, who on Wednesday announced his intention to resign at the end of July, the Supreme Court of the United States is set to lean majority conservative—quite possibly dooming legal abortion in the United States.

With his final bow, Kennedy, who to his chagrin is often known as the "swing vote" among the nine justices, has screwed over American women more than he ever would have as an existing justice.

Until now, Kennedy has served as the "swing vote" on decisions that swing mildly to the left—the middle-ground justice on a court that often leans four left and four right. A lifelong conservative icon, Kennedy nonetheless passionately argued for gay marriage to become law—yet his decisions have betrayed an antiquated view towards women's rights (as fellow justice Ruth Bader Ginsburg once pointed out).

Kennedy's decision particularly stings for its timing. We are more than two years out from the president of this country being anyone other than Donald Trump, who has pledged to nominate only conservative judges during his tenure. Trump's first and only nomination so far has been now-Justice Neil Gorsuch, who leans sharply to the right—and yet is not quite as evangelically conservative as liberal-leaning activists feared. In some ways, liberal groups argued, Neil Gorsuch was the best they could have hoped for.

In other words, all was not lost. Gorsuch had replaced Justice Antonin Scalia, after all, and the two served the same role on the court: Staid, reliably right-wing justices. So although Gorsuch was, in many liberals' eyes, the inferior choice to Obama nominee Merrick Garland, Gorsuch's arrival did not change the ideological makeup of the court in any significant way.

The same can't be said for Kennedy's departure.

When President Trump nominates a conservative justice, as he will, and when the Republican-leaning Congress approves that person, as it will, the highest court in the country will lose its swing member and become a conservative-leaning body. From there, it's only a matter of time until a challenge to existing abortion rights—as in, a challenge to women's right to have an abortion—mounts through the lower courts to reach the Supreme Court, and the group votes along party lines.

This is the point at which abortion becomes illegal. This is the point at which, much like when President Trump was elected, we wonder who is going to save us—and we realize that nobody will. That we live in a country where women are the lesser gender, where acquiring a termination could soon be a criminal act, and where minorities are treated as second-class citizens. And if the new justice is, like Neil Gorsuch, relatively young, then this could go on for decades.

There was nothing Anthony Kennedy could have done to screw over women more than what he has done.

Related Story
Roe v. Wade Is in Grave Danger
Jenny Hollander Director of Content Strategy Jenny is Marie Claire’s Director of Content Strategy, editing and writing about everything from politics to reality television to accessories and celebrity news.
This content is created and maintained by a third party, and imported onto this page to help users provide their email addresses. You may be able to find more information about this and similar content at piano.io
Advertisement - Continue Reading Below
More From Politics
For Teachers, Going to Work Can Mean Life or Death
Want to Help Moms? Prioritize Menstrual Equity
Advertisement - Continue Reading Below
Abortion Rights Start at the State Level
All of Your Abortion Questions Answered
The Texas Abortion Snitch Site Is Having a Bad Day
The Future of Afghan Women Depends on Us
How You Can Help People in Afghanistan
Andrew Cuomo Has Resigned as NY Governor
Gwen Berry: Athlete, Activist, Olympian
The Anti-Choice Endgame: Power And Control