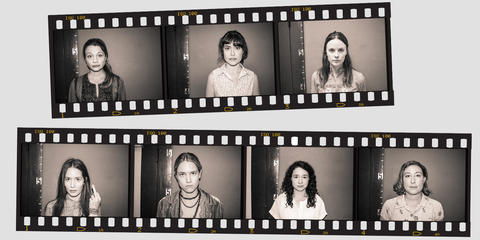 Ask for Jane begins with a series of tragic vignettes depicting our not so distant past: In the opening scene, a pregnant woman punches herself repeatedly in the stomach; when that doesn’t work, she jumps off a building. Then, we see a pregnant teen drink rat poison, which kills her. Later, we meet a woman pressured to marry the man who raped and impregnated her (he’s real sorry, her dad tells her), another who is denied birth control because she’s unmarried, and, in perhaps the most infuriating scene of the film, a woman begs doctors to operate on a tumor in her abdomen—she may die if they don’t, leaving her two children at home motherless—but the physicians are more concerned with the impact on the fetus she’s carrying. The doctors take her husband out in the hall to discuss the situation while the woman wails helplessly in a hospital bed—god forbid she have a say in the discussion that will determine whether she lives or dies.

“We’ve lost those stories,” says Cait Cortelyou, 31, the brainchild behind Ask For Jane, a feature film about an underground abortion service run by women in Chicago in the years before the procedure was legal, opening in theaters May 17. “The right wing has been so effective in showing us images of fetuses and all kinds of horrible imagery, but there’s devastating pictures on the other side, too, of women trying to [perform an abortion] themselves with umbrella spokes and knitting needles, only we’re not seeing them. I’m excited to bring the humanity back to this story because the whole conversation around abortion has gotten so distanced from the actual women it concerns.”

The film is a vivid and painful reminder of that history—a reality we are regressing toward more and more every day. (I’m looking at you, Alabama, Georgia, and the at least 14 other states that have proposed banning abortion at six weeks, before most women know they are pregnant.) It was a time when women had no control over their own bodies, the quality and determination of their lives held hostage by laws and the men who crafted them. It’s a fictionalized account of the real-life Jane Collective, originally known as the Abortion Counseling Service of the Chicago Women’s Liberation Union, which was started in 1968 by a group of women who went by the moniker “Jane,” as in Jane Doe.

At the time, as many as 5,000 women in the U.S. died each year from botched illegal abortions and the founders wanted to stop the deaths by providing a safe alternative. At first, the Janes accompanied women to see vetted providers who would perform abortions, often for an exorbitant fee; later, after they learned, despite all the controversy, that abortion is a minor, easily-completed medical procedure, the Janes began performing abortions themselves, dramatically reducing the cost to their patients, most of whom were poor (wealthier women could afford to take a bus to New York where it was legal to terminate pregnancies). Ultimately, in the five years they operated, the Jane Collective provided 11,000 abortions without a single casualty. “I think they’re so brave,” says Cortelyou, who stars in the film and also served as a producer. “They saw that women were dying and they said if society isn’t going to help them, I guess we’ll just do it ourselves.”

Cortelyou first heard of the group in May 2016 when she watched a 2014 documentary called, She’s Beautiful When She’s Angry. “I was shocked and horrified that I had never heard this story of the Jane Collective before,” says Cortelyou, who also volunteers as a patient escort at a Planned Parenthood clinic in NYC. “Before the [2016 presidential] election, I didn’t have any idea how relevant this was going to be, I just thought it was a huge piece of women’s history that people should know about.” She went home and wrote a treatment for the film that night; the next day, she brought on Rachel Carey, a friend from The Shelter theater company where they are both members, to write and direct. “Not to get too woo-woo, but it really felt like the universe was telling me it was my purpose to make this film,” Cortelyou says. “It felt so much bigger than me.”

I first met Cortelyou back in the summer of 2017 when I visited the film set in Brooklyn. Inside a historic mansion, I watched the cast perform a scene where the Janes debate whether to go public about their work at a protest. Publicizing their efforts could help more women in need find them, but it would also open them up to arrest. Two members decide to attend the protest, advertising their service on a large banner—after all, the police already knew the collective existed (in one scene, an officer admits the women have helped many of the wives and girlfriends of men on the force). But the protest, and a subsequent newspaper ad, did indeed attract the attention of law enforcement, who later arrested seven Janes (called “the abortion seven” in newspaper headlines), along with a handful of their patients, charging them with up to 110 years in prison.

Ask for Jane is dedicated to the real women who made up the Chicago abortion service “in the hopes that women will never have to do this for each other again,” Cortelyou says. Women like Judith Arcana, 76, a Jane who served as a consultant on the film and also makes a cameo. When Arcana was 27, she thought she was pregnant and didn’t want to be; she and her husband were separated and neither had money to raise a child. She asked around: Do you know anybody who has had an abortion? Do you know anybody who knows anybody? “And someone said call this number and ask for Jane,” Arcana says. “When I thought I needed an abortion, there they were…right there in the city where I lived.” It turned out she wasn’t pregnant but her conversations with the woman on the other end of the phone intrigued her and she accepted an invitation to attend a meeting. At the gathering, Arcana thought, This is a really good thing these women are doing. “And I joined right up,” she says. “They were smart, they were fun, they were funny, and they were doing this incredibly heavy duty thing. I lucked into goodness.”

WATCH AN EXCLUSIVE CLIP FROM ASK FOR JANE HERE

Arcana hopes when people see the film they walk away with an understanding of how necessity can turn anyone into an activist. “This movie is about a group of young women taking action on a righteous cause,” she says. “I was not a political person even the year before, but the need was so great and so central in the lives of everyone, especially of course, women and girls.” The film is a reminder, Arcana says, of the past, but also what might need to be done in the present. “We did this. This could happen. This did happen. And we know that it’s happening now too,” she says.

Cortelyou says she wants people who don’t consider themselves pro-choice to see the film because her “biggest wish” is for it to change minds. “Ask for Jane really brings home that [abortion] is about individuals and that’s why it needs to be a choice. A lot of us don’t know our history, so it’s easy for some to say we should repeal Roe v. Wade because they don’t have an understanding of the lives that will be lost if that happens,” she says of the landmark decision that legalized abortion in 1973, and which many experts believe is in danger of being overturned. “I want people to leave with a deeper understanding of the myriad reasons why a woman might seek an abortion.” She hopes older generations will see the film and “turn to their daughters and say, ‘That’s what it was like for me—that’s what you don’t understand,’” Cortelyou adds. “We can’t become complacent; we have to keep fighting for what should be a fundamental human right.”

I went to the New York City premiere of Ask for Jane on Tuesday night with a friend. As we exited the theater, we turned to each other and said, “That was terrifying.” Then, we looked at our phones and learned that while we were watching the film, the Alabama State Legislature passed the strictest antiabortion legislation to date, outlawing the procedure in nearly all circumstances. Once enacted—Governor Kay Ivey signed the measure on Wednesday—abortion will be allowed in the state only if the life of the mother or fetus is at risk; the law makes no exception for rape or incest. Women will not be punished for getting an illegal abortion, but the doctors who perform them will face up to 99 years in prison.

The legislation is designed to prompt a Supreme Court challenge to Roe v. Wade, and its anti-choice framers are confident that, with two new conservative justices appointed by President Donald Trump, the decision will go their way. If that happens, abortion will automatically become illegal in as many as 18 states, with many others expected to quickly pass legislation outlawing the practice. And in that world, we’re going to need a whole lot more Janes. Because as both history and research has shown, outlawing abortion doesn’t make it go away—it just makes it deadly.

What Happens When You Can't Afford an Abortion?
Kayla Webley Adler Deputy Editor Kayla Webley Adler is the Deputy Editor of ELLE magazine.
This content is created and maintained by a third party, and imported onto this page to help users provide their email addresses. You may be able to find more information about this and similar content at piano.io
Advertisement - Continue Reading Below
More From Politics
In Honor of RBG, Nine Women Reflect on Her Legacy
What I Learned Working on Garland's Confirmation
Advertisement - Continue Reading Below
Where Senators Stand on Replacing RBG in 2020
Ruth Bader Ginsburg's Most Iconic Quotes
RBG's Deathbed Wish Was a Message for Trump
Can a SCOTUS Justice Be Replaced in 2020?
The World Reacts to Ruth Bader Ginsburg's Death
Ruth Bader Ginsburg—Woman, Justice, Icon—Has Died
How to Make an Impact in the 2020 Election
About Those Ballot Drop Boxes—Here's What to Know