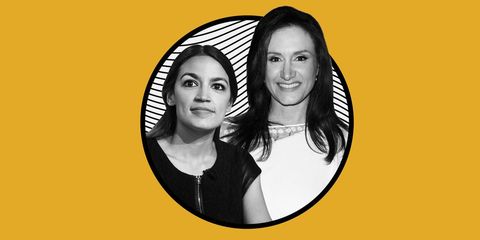 The rise of U.S. Representative Alexandria Ocasio-Cortez (AOC) in New York’s 14th Congressional District was part of a historical moment—when a record 100 women were elected to the House. AOC helped open doors—and now ex-MSNBC anchor Michelle Caruso-Cabrera is hoping to walk through them, running against AOC for her seat representing the Bronx and Queens in the Democratic primary election on June 23. Here’s what MCC, as she’s known, says she is bringing to the race (and, possibly, to the House).

Marie Claire: How long have you been thinking about a political run? Has this been in the back of your mind since the 2016 election, like it was for many of the congresswomen elected in 2018?

Michelle Caruso-Cabrera: I was still working in journalism at the time of the 2016 election, so I didn’t think about it in those terms. The first seed was planted when Amazon decided against building their headquarters in the Bronx in early 2019. This district deserves better—the median income of New York-14, which includes the Bronx and Queens, is $60,000 a year, while in the next district over in Manhattan, the median income is $110,000. I’m running because I want to be a congresswoman who brings more and better jobs to the district.

"I’m not looking to be a national star—I’m focused on this race and the issues that are important to the people of the Bronx and Queens first."

MC: You cite your grandparents and their immigrant experience as inspiration. How does their coming-to-New York story factor into the race for you?

MCC: The people of the Bronx and Queens remind me so much of my grandparents. Many of them or their parents have recently arrived in the U.S. When my grandmother and grandfather first came from Italy and Cuba, they both worked in the dangerous and unregulated meatpacking industry—where it was easy to lose a finger or an arm. Eventually, my grandmother ended up also working as a waitress in a donut shop for tips in addition to her wages. Two generations later, their granddaughter has had a successful career and is able to run for Congress. That’s the American dream.

MC: This race started off with as many as 15 people on both the Democratic and Republican sides in the running for this seat. Why do you think this race is so buzzy?

MCC: It’s getting buzz because AOC is part of this huge group of freshman reps in Congress that’s been making headlines, and that’s exactly what I’ll be. I worked at Pizza Hut and in landscaping before I worked in journalism. After those experiences, I’m ready to take on a new challenge, because in seeing and listening to the people living in this district, I know what they want. And the great thing about democracy is anyone can enter in. You don’t need a degree—you just have to inspire people with your ideas.

Michelle Caruso-Cabrera hands out face masks on the campaign trail in Queens, May 2020.
ANGELA WEISSGetty Images

MC: What ideas in particular are you sharing with the residents of NY-14?

MCC: The main three things for me are more jobs, more schools, and streets that are safe. First, I want to reach out to businesses that want to come to Queens and Bronx—if you want to start a business here, I’d like to help you. Other than that, parents are very eager to have more good schools, and to have a choice in where their kids go to school. And to keep the streets safer, we need criminal justice reform that doesn’t target minorities, many of whom end up in jail because they can’t afford bail for non-violent crimes. Of course we can’t afford to have violent people returning to the streets, but there needs to be rational bail reform.

Caruso-Cabrera moderating a round table during her time as a CNBC anchor.
Ethan MillerGetty Images

MC: Can you give us a sneak peek into some issues in Congress that you have your eye on?

MCC: When I’m in Congress, I want to focus on ways to reduce healthcare costs. People shouldn’t have to worry about the cost of their prescriptions that keep them healthy. Another issue that’s really important is tax policy. Congress voted to get rid of the deduction for state and local income taxes, so if you own a home in this district, it’s suddenly impossibly expensive to do so. I would want to introduce a bill to bring back the deduction for these homeowners.

I’m not looking to be a national star—I’m focused on this race and the issues that are important to the people of the Bronx and Queens first. My career has taught me, first and foremost, to listen. As a journalist, you ask a question and then you listen for the answer. I want to listen to what the people of New York-14 want. Most importantly, what I’ve heard is they want someone who will be present to listen to their concerns. My door will always be open.

Related Story
AOC & Bernie: The First Couple America Needs?
Mara Santilli Mara is a freelance writer specializing in culture, politics, wellness, and the intersection between them, whose print and digital work has appeared in Marie Claire, Women’s Health, Cosmopolitan, Airbnb Mag, Prevention, and more.
This content is created and maintained by a third party, and imported onto this page to help users provide their email addresses. You may be able to find more information about this and similar content at piano.io
Advertisement - Continue Reading Below
More From Countdown to the 2020 Presidential Election
Cecile Richards on Mobilizing Women to Vote
The Best Way to Honor RBG Is With Your Vote
Advertisement - Continue Reading Below
In Maine, Sara Gideon Could Help Flip the Senate
Your Guide to the 2020 Presidential Debates
Inside Sarah McBride's Historic State Senate Run
Jot Down These 2020 Voter Registration Deadlines
How to Make an Impact in the 2020 Election
About Those Ballot Drop Boxes—Here's What to Know
Jill Biden's Vote Boots Send a Powerful Message
We Need Poll Workers Now More Than Ever