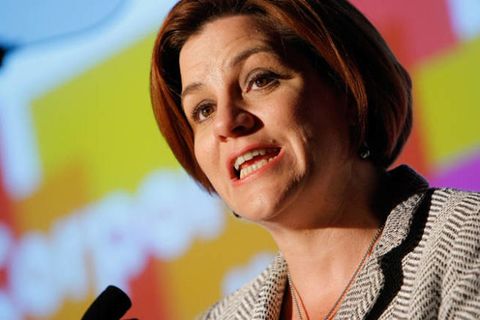 Christine Quinn was poised to be the first female mayor of New York City—and the first openly gay one, too—until her frontrunner status quickly dwindled in last year's Democratic primary. The then-speaker of the New York City Council suffered a crushing defeat from Public Advocate Bill de Blasio, who eventually won the general election, and she laid low for a while to figure out her next move.

She could never work for a big-time corporate firm, she told the New York Times, and she definitely couldn't be a lobbyist. In the end, she decided to dedicate her energy to women's rights. Quinn has announced she's joining the board of Naral Pro-Choice New York, a statewide abortion rights group, where she'll give advice about political strategy.

The group, which endorsed Quinn in last year's primary, is currently fighting to pass the Women's Equality Act in the New York State Senate. The act, a proposal from Governor Andrew Cuomo, includes measures on equal pay and sexual harassment, but has been stalled due to lawmakers blocking new revisions to the state's abortion law. If passed, the act would codify Roe v. Wade into state law and give new protections to doctors.

"What I'm going to be doing is doing everything I can to make sure that Albany is soup-to-nuts pro-choice," Quinn told the New York Times.

And Quinn is keeping busy in other arenas, too. She created the Women's Equality Party to support Governor Cuomo's re-election bid, and joined the board of the nonprofit Athlete Ally, which fights homophobia in the sports world. But is this the end of Christine Quinn the politician? Hardly—she said she'd definitely consider another run for office in the future.


This Act Could Put an End to Anti-Abortion Legislation