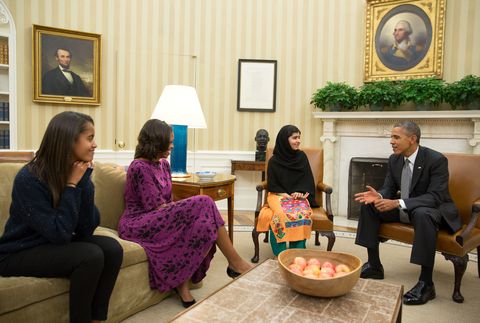 When Malala Yousafzai fought for her right to an education, she was nearly killed by the Taliban – but ended up winning a Nobel Peace Prize. There are undoubtedly more Malalas out there in the world, but they're being blocked from reaching their potential by oppressive regimes and cultures that intentionally hold women back.

The U.S. is launching a brand-new program to try and change that. Tuesday afternoon, President Obama and the First Lady are announcing Let Girls Learn, an initiative aimed at helping girls around the world get the education they deserve.

Let Girls Learn is an extension of a program by the same name that USAID launched last summer. Currently, the group's workers are helping equalize education, improving reproductive health, and empowering girls to fight for their rights in third-world countries.

Today's new program will give this effort a major boost in resources. Michelle Obama will be working with the Peace Corps to train thousands of volunteers, nonprofits, and local community leaders to help empower girls to get educated. It'll start in 11 countries, mostly in Africa, and then expand after the first year. Plus, the state department, UNICEF, and UNESCO are working on various programs around the world to boost education to kids who need it most.

USA Today reports that the White House plans to ask Congress for $250 million to promote Let Girls Learn, and the First Lady will talk up her plans on an upcoming trip to Japan and Cambodia.

According to a government fact sheet, 62 million girls around the world are not in school, and are thus more vulnerable to HIV/AIDS, forced marriage, and domestic violence. Here's hoping this new initiative shrinks that number for good.

"If They Capture Me, They Will Kill Me at Once": Meet the Iraqi Woman Fighting ISIS