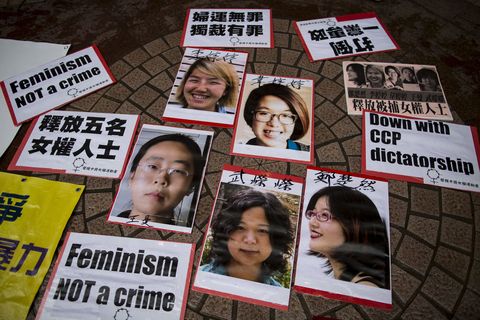 Five Chinese activists were put in jail for over a month for doing something that women's groups in the U.S. do every day. The women, dubbed the "Feminist Five," were simply going to protest how women are treated on the subway.

Li Tingting, Wu Rongrong, Zheng Churan, Wei Tingting, and Wang Man are all in their 20s and 30s, and have used eye-catching stunts to make a point about women's rights in China. According to the New York Times, they've shaved their heads, barged into men's restrooms, and splashed wedding gowns with red paint, just to name a few tactics.

They were arrested on March 6, two days before International Women's Day, NBC News reports. They were accused of "picking quarrels and provoking trouble" after planning to protest sexual harassment on public transportation using leaflets. They were held in a Beijing detention center, without any charges, for over a month.

The backlash was swift. More than 1,000 people in China signed a petition calling for the women to be released. In the States, Hillary Clinton, John Kerry, and UN Ambassador Samantha Power made public statements condemning their arrest. And activists online have rallied around the hashtag #freethefive, posting pictures of themselves wearing masks of the protesters' faces.

They were released on bail Monday, according to the Guardian, but they could still face charges at a later time. The Chinese government does not allow organized protest, and cracks down on small demonstrations.

Chinese officials didn't comment on their release, but the Christian Science Monitor notes that they're about to host a meeting on women's rights, on the anniversary of the famous Beijing summit on gender equality. So, you know, the optics might not have been the best.