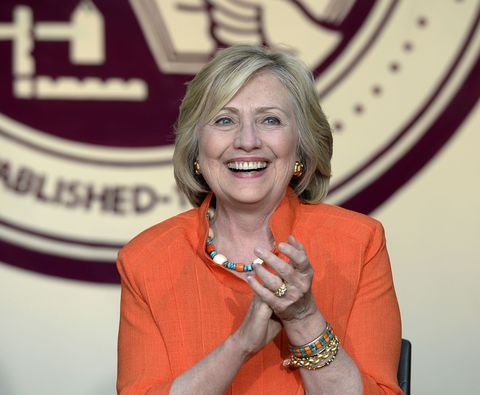 Hillary Clinton was reportedly in transit—and possibly taking a selfie with Kim Kardashian (?)—during both Republican debates, but her presence was very much felt as each candidate took repeated swipes at the Democratic frontrunner.

Donald Trump, in one of his many "charming" non sequiturs, spoke pseudo-warmly of Clinton as one of the many people that he literally pays to be his friend. "I'll tell you what, with Hillary Clinton, I said, 'Be at my wedding,' and she came to my wedding," Trump said. "You know why? She had no choice, because I gave [$$]."

"Hillary being the Democratic nominee would be a dream come true," Ben
Carson said of what he thinks would make for an easier competition.

And Scott Walker threw an email-related zinger (it was bound to happen): "Probably the Russian and Chinese government know more about Hillary Clinton's email server than do the members of the United States Congress."

Hillary herself did not respond to any of these comments, of course, but that didn't stop the Internet from colorfully imagining what her reaction would be.

In one word? Smug.

Watching the #GOPdebate? Bet you feel like joining a Democrat's campaign right about now. https://t.co/2No2qbOIMU