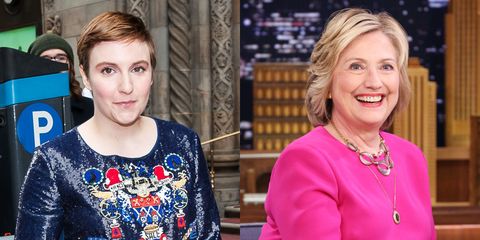 Update, 9/26: Never one to shy away from a good laugh, Hillary Clinton is showing off her comedic chops in a new Funny or Die video—and yes, we're pretty impressed. Set up as a mock promo for her September 29th sit-down with Lena Dunham, the clip starts off with Clinton admitting she was confused by the offer to do an interview for the actress' new site, the Lenny Letter.

"I thought this was an interview with Lenny Kravitz," she tells Dunham, which prompts the most obvious follow-up from the Girls star: "Did you see the footage where his pants split?"

Somehow, the news didn't come across Clinton's desk. Still, it doesn't mean her curiosity isn't piqued. "No, I missed that," the former Secretary of State responds with wide eyes. Dunham decides it's a good idea to catch her up, explaining, "I mean… his stuff fell out of his pants."

"Yeah? Do you think I could get that on YouTube?" the presidential candidate asks. "...I'll look for that."

Original story, 9/24: Lena Dunham is an avid supporter of Hillary Clinton (not new), and the Lenny Letter founder recently sat down with the presidential hopeful to get her take on all the issues (new). While the interview won't be up until Tuesday the 29th, Dunham released a teaser clip of the interview, in which Clinton answers *the* question. That is: Are you a feminist?

"Yes, absolutely," she says. "I'm always a little bit puzzled when any woman of whatever age, but particularly a young woman, says something like, 'well, I believe in equal rights but I'm not a feminist.' Well, a feminist is by definition someone who believes in equal rights. I'm hoping that people will not be afraid to say, that doesn't mean you hate men, it doesn't mean you want to separate out the world, so you're not a part of ordinary life—that's not what it means at all! It just means that we believe women have the same rights as men—politically, culturally, socially, economically—that's what it means."

Spoken like a true boss (and someone that Aziz Ansari would definitely agree with.)

Watch the full video below:

Samantha Leal Senior Web Editor I'm Sam, the senior editor at MarieClaire.com.
This content is created and maintained by a third party, and imported onto this page to help users provide their email addresses. You may be able to find more information about this and similar content at piano.io
Advertisement - Continue Reading Below
More From Politics
Important 2021 Elections to Keep on Your Radar
Lisa Murkowski Hints She'll Vote to Convict Trump
Advertisement - Continue Reading Below
AOC Calls Out the Hypocrisy of "Blue Lives Matter"
All Your Qs About Biden's Inauguration, Answered
President Donald Trump Was Just Impeached, Again
Teleabortion: A Bitter Pill
Cori Bush Decries GOP Refusing Safety Protocols
AOC Thought She Was Going to Die Inside Capitol
Attorney General Letitia James Takes on the World
Can Trump Be Impeached After Biden's Inauguration?