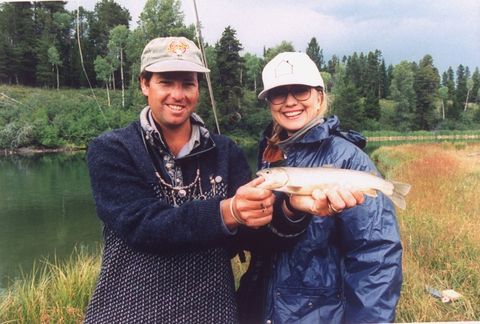 Of all people, Hillary Clinton is our new it's-okay-to-not-know-what-you-want-to-do-with-your-life hero: In a new interview with Lena Dunham for Lenny Letter, the presidential hopeful revealed that before she went to law school and started her path into politics, she took a life-break and ran off to Alaska to gut salmon at a fishery.

"I went off with some friends on this jaunt," she said. "We drove all the way up to Alaska, went up the then-unpaved Alcan Highway, and we took odd jobs."

But this is still Hillary Clinton we're talking about, so it should come as no surprise that she did some advocating while she was there. "I noticed that some of them didn't look really healthy to me," she said. "So I raised it with the guy who was running the plant. He said, 'What do you care? They're gonna be shipped overseas! Nobody in America's gonna eat them.'"

Despite her protests, her boss made her keep packing the fish—but the next day, she went back to work and the entire operation had "disappeared." (Clinton told the New York Times back in 1992 that she actually got fired for asking too many questions, but she found another odd job.)

Clinton went back home and started law school at Yale, and the rest is history. So thanks, sketchy fish guy—in a way, you gave us the Hillary we have today.