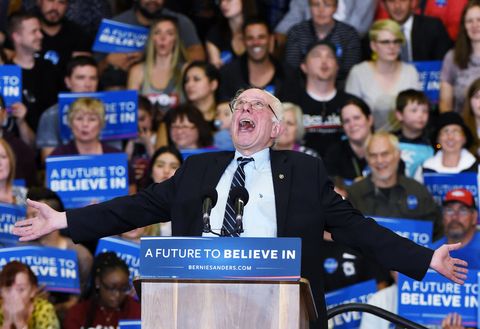 What does Super Tuesday even mean? Super Tuesday refers to the single day during a presidential election with the largest number of primary elections—today, for example, roughly a dozen states and U.S. territories head to the polls to vote or caucus for a Republican or Democratic candidate to win their party's nomination. The term Super Tuesday is relatively new, actually—it was first used in 1980, according to Minnesota Public Radio, but didn't really become a thing until 1988.

Which states and territories are involved in this year's Super Tuesday? Alabama, Arkansas, Georgia, Massachusetts, Minnesota, Oklahoma, Tennessee, Texas, Vermont, and Virginia are holding primary elections for both Republicans and Democrats. Alaska is holding a Republican caucus; Colorado is holding a Democratic caucus. In the U.S. territory of American Samoa, Democrats will turn out for a primary.

Okay, but why is it so super? Until today, there have been four primaries or caucuses in this presidential race: Iowa, New Hampshire, Nevada, and South Carolina. Super Tuesday is, therefore, the closest thing we have thus far to a national election. And it gives the frontrunners a chance to really pull ahead. The Republican candidate needs 1,237 delegates to secure the party's nomination, and 661 delegates are up for grabs today. The situation is similar for the Democrats: a candidate needs 2,383 to win the nomination; 865 are on the table. Going in to Super Tuesday, Hillary Clinton and Donald Trump both have sizable leads in most of the states.

So Hillary Clinton and Donald Trump can lock down the nomination? They can't quite lock it down, but the frontrunners can put some serious distance between themselves and their closest rivals. Clinton, who's riding high off a big win in South Carolina over the weekend, is expected to take the majority of the states, but Sanders, according to Time magazine, is hoping to win Colorado, Oklahoma, Minnesota, Massachusetts, and his home state of Vermont. The big question about Trump is whether he can run the board and take all the Super Tuesday states. He's currently won three of four primary states, but Ted Cruz is hoping to beat Trump in at least one place: his home state of Texas.

What happens after today? Clear frontrunners will likely emerge, and a couple of Republican candidates may drop out if they fail to gain traction, namely Ohio Governor John Kasich and neurosurgeon Ben Carson, who are trailing their rivals by big margins in the polls. It's worth noting that Kasich has said he'll stay in the election until the Ohio primary.

Are there other primaries after Super Tuesday? Yes! Quite a few: Florida, for instance, holds its primary on March 15. Trump is leading in the polls among Republicans, but that's Marco Rubio's home state, so winning there is a big deal for him. Ohio's primary is also on March 15, and Trump has a slight lead in the polls over Ohio Governor John Kasich.

When is this all over? The Republican convention is July 18 through 21 in Cleveland; the Democratic convention is July 25 through 28 in Philadelphia. This is when the parties officially decide on their nominees, but between primary wins and candidates dropping out, the parties will likely know who their presidential candidate is before July—unless, that is, the Republicans decide to stage a coup against Trump, in which case things could get messy and very interesting on the Republican side. The general election—when all of this is really over—is November 8.

For even more about Super Tuesday and the road ahead, read sister site Elle.com's interview with John Dickerson, host of Face the Nation on CBS, who offers some unique insight into the race.

Michael Sebastian Michael Sebastian was named editor-in-chief of Esquire in June 2019 where he oversees print and digital content, strategy and operations.
This content is created and maintained by a third party, and imported onto this page to help users provide their email addresses. You may be able to find more information about this and similar content at piano.io
Advertisement - Continue Reading Below
More From Politics
Daunte Wright's Death Sparks Protest in Minnesota
41 Surprising Rules First Ladies Have to Follow
Advertisement - Continue Reading Below
Asian American Women on Where to Go From Here
Syrian Journalists Reflect on a Decade of War
How to Show Your Support for the AAPI Community
Activist Lydia X. Z. Brown on Disability Justice
Elisa Crespo: "I'm Not Here to Make History"
What We Know About the Georgia Spa Shootings
Dianne Morales Has Never Listened to the Naysayers
Stacey Abrams on Her Definition of Success