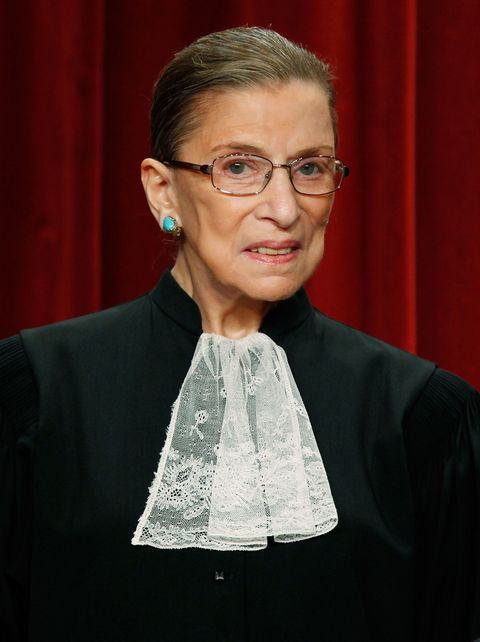 Ginsburg, whose husband Martin died in 2010, even joked about what Martin would say if he was here to watch Trump, well, trump the Republican race. "'Now it's time for us to move to New Zealand,'" Justice Ginsburg said, joking in a way that only the Notorious R.B.G. can.

Ginsburg's reveal is noteworthy because, as the Times states, the other Supreme Court Justices have said nothing publicly about the presidential campaign. In addition, justices typically avoid interviews all together and, when they do participate, they skillfully avoid political topics. So, this R.B.G. truth bomb is a big deal.

Ginsburg also discussed the appointment of a new justice to the Supreme Court after the death of Antonin Scalia in February. Ginsburg endorsed Judge Merrick B. Garland, Obama's nominee. The nomination has been stalled as the Senate refuses to hold a hearing or vote, which Ginsburg criticized.

"That's their job," Ginsburg said when asked if the Senate has an obligation to assess Judge Garland's qualifications. "There's nothing in the Constitution that says the president stops being president in his last year."

At 83, Ginsburg has no plans to step away from her throne on the Supreme Court. She told the Times she plans on continuing "as long as I can do it full steam."

Prepare for more nuggets of Ginsburg wisdom in the future.

Maggie Maloney Associate Digital Editor Maggie Maloney is the associate editor at Town & Country and ELLE Decor, where she covers style, beauty, jewelry, and the many members of the royal family.
This content is created and maintained by a third party, and imported onto this page to help users provide their email addresses. You may be able to find more information about this and similar content at piano.io
Advertisement - Continue Reading Below
More From Politics
Give Domestic Workers the Protections They Deserve
Kristin Urquiza Wants Justice for COVID-19 Victims
Advertisement - Continue Reading Below
A Breakdown of VP Harris's Net Worth
WH Announces Removal of the Hyde Amendment
What Liberation Means This Juneteenth
Kathryn Garcia: It's Time to Step Up or Shut Up
A Valedictorian Speaks Out Against Abortion Bans
Standing Between Care and Violence
Seeking Healing a Century After the Tulsa Massacre
What to Know about Texas's Abortion "Trigger Ban"