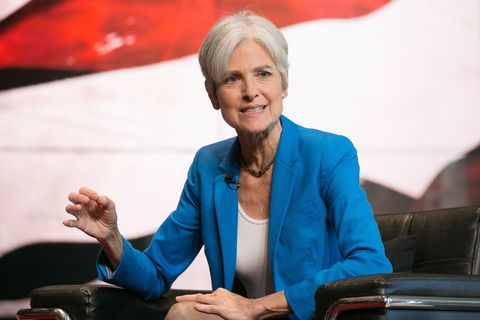 Green Party presidential candidate Jill Stein officially filed a petition for an election recount in Wisconsin on Friday, which was confirmed by the Wisconsin Election Commission on Twitter just before the 5 p.m. deadline for such requests.

The Commission has received the Stein and Del La Fuente recount petitions. Details and news release posted soon at https://t.co/N3TrlOIqE1.

Shortly thereafter, a statement was released announcing the decision to move forward with the recount.

"The Commission is preparing to move forward with a statewide recount of votes for President of the United States, as requested by these candidates," Wisconsin Election Commission Administrator Michael Haas said. "We have assembled an internal team to direct the recount, we have been in close consultation with our county clerk partners, and have arranged for legal representation by the Wisconsin Department of Justice. We plan to hold a teleconference meeting for county clerks next week and anticipate the recount will begin late in the week after the Stein campaign has paid the recount fee, which we are still calculating."

On Tuesday, Stein and the Green Party announced plans to launch a fundraising campaign to cover recount costs and fees for three key swing states—Wisconsin, Pennsylvania and Michigan—in order to "ensure the integrity of our elections." As of Saturday, the initiative has raised $5,718,813. This far exceeds the amount Stein raised during her entire presidential campaign, which was listed in her final campaign finance report at $3,509,477.

"We don't know, and we think the forensic computer experts have raised serious questions. What we do know is that this was a hack-riddled election, we saw hacks into voter databases, into party databases, into individual email accounts. We know that there were attempts made broadly on state voter databases and we know that we have an election system that relies a computer system that is wide open to hacks," Stein told CNN's John Berman on Thursday. "It's extremely vulnerable, Americans deserve to have confidence in our vote."

With the recount for Wisconsin in the works, that leaves Pennsylvania and Michigan. It seems ample funds have been raised to cover the filing costs for both states, as well as much of the associated legal fees. The recount request deadlines for Pennsylvania and Michigan are November 28 and November 30, respectively, so that still allows time for additional funds to be raised towards the total goal of $7 million.

This push comes after a group of computer science experts and election lawyers urged Hillary Clinton to call for a recount in Wisconsin, Michigan and Pennsylvania, where they found anomalies (though, it's worth noting, no hard evidence was discovered) that suggested the results may have been hacked or manipulated.

Though Clinton's campaign had remained relatively quiet on the subject to date, it formally announced on Saturday that while it is not planning to contest the election results, it will take part in the efforts to secure recounts in these states.

"Because we had not uncovered any actionable evidence of hacking or outside attempts to alter the voting technology, we had not planned to exercise this option ourselves, but now that a recount has been initiated in Wisconsin, we intend to participate in order to ensure the process proceeds in a manner that is fair to all sides. If Jill Stein follows through as she has promised and pursues recounts in Pennsylvania and Michigan, we will take the same approach in those states as well. We do so fully aware that the number of votes separating Donald Trump and Hillary Clinton in the closest of these states — Michigan — well exceeds the largest margin ever overcome in a recount."

Clinton's total popular vote has grown to an impressive lead of more than 2 million votes in the weeks since the election. The three states in focus earned victor Donald Trump a significant 46 electoral votes, though the latest polling results show his win came by small margins: 10,704 votes in Michigan; 27,257 votes in Wisconsin; 70,638 in Pennsylvania. Only if the results for all three of these states are flipped would it swing the Electoral College in Clinton's favor.