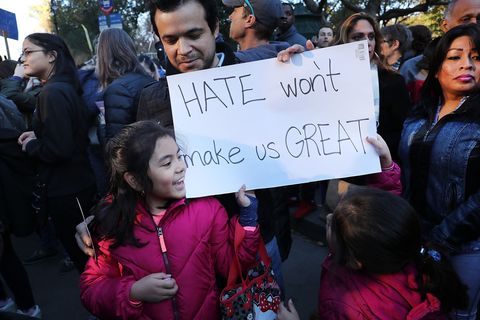 Members of the Electoral College are meeting at State Capitols across the country on Monday to cast their ballots for president. Although the presidential election happened on November 8, its the Electoral College that officially chooses the next president of the United States based on the popular vote from each state or, in a couple of instances, votes from congressional districts.

Typically, the meeting of the Electoral College is a formality, but with Hillary Clinton winning the popular vote by nearly 3 million ballots and U.S. intelligence agencies saying Russia meddled in the presidential election, protesters are turning up at State Capitols to encourage Electors to switch their votes from Trump to Clinton.

Those laws are rarely tested. More than 99 percent of electors through U.S. history have voted for the candidate who won their state.

A protester outside the Capitol Building in Pennsylvania.
Getty Images

"I cast my Electoral College vote for Bernie Sanders today to let those new voters who were inspired by him know that some of us did hear them, did listen to them, do respect them and understand their disappointment," the Elector wrote on Facebook.

Despite the protests, Trump surpassed the 270 required to win the presidency.

Michael Sebastian Michael Sebastian was named editor-in-chief of Esquire in June 2019 where he oversees print and digital content, strategy and operations.
This content is created and maintained by a third party, and imported onto this page to help users provide their email addresses. You may be able to find more information about this and similar content at piano.io
Advertisement - Continue Reading Below
More From Politics
Kristin Urquiza Wants Justice for COVID-19 Victims
A Breakdown of VP Harris's Net Worth
Advertisement - Continue Reading Below
WH Announces Removal of the Hyde Amendment
What Liberation Means This Juneteenth
Kathryn Garcia: It's Time to Step Up or Shut Up
A Valedictorian Speaks Out Against Abortion Bans
Standing Between Care and Violence
Seeking Healing a Century After the Tulsa Massacre
What to Know about Texas's Abortion "Trigger Ban"
A New Book Invites Us to Rethink Menstrual Equity