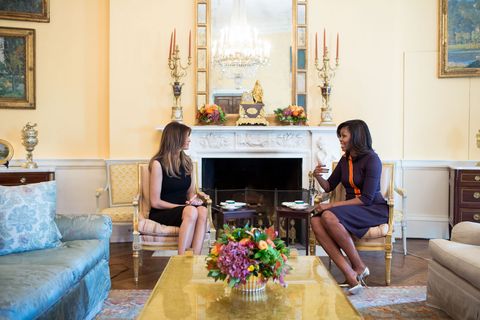 Sadly, Michelle Obama is only going to be first lady for a few more weeks. But she made it clear in an interview with Oprah, which airs in full on CBS Monday night, that she will welcome Melania Trump with open arms.

When they met at the White House after Donald Trump won the election, they apparently stuck to talking about their kids. But the First Lady said she's relied on a long string of advice from former First Ladies to teach her what to do. "My offer to Melania was, you know, you really don't know what you don't know until you're here, so the door is open, as I've told her," she said. "And as Laura Bush told me, and as other First Ladies told me. So I'm not new in this 'going high' thing. I'm modeling what was done for me by the Bushes. Laura Bush was nothing but gracious and helpful, and her team was right there for my team, all throughout this entire eight-year process."

So despite political differences (and a teensy plagiarism scandal), the role of a First Lady is to keep things classy, and that's just what Michelle Obama is doing, naturally. "We will do whatever they need to help them succeed," she said. "So that's one of the things I said to Melania: When you get to a place when you can digest all this and you have questions—because you don't have questions the day after the election—my door is open. And that was really the nature of the meeting."

She also opened up to Oprah about being labeled an "angry black woman" early on. "That was one of those things where you think, 'Dang, you don't even know me.' You just sort of feel like, 'Wow, where did that come from?'" she said. "You start thinking, 'Oh, wow, we're so afraid of each other.' Color. Wealth. These things that don't matter still play too much of a role in how we see one another, and it's sad because the thing that least defines us as people is the color of our skin."

"The thing that least defines us as people is the color of our skin."

But the first lady decided that actions speak louder than words. "I thought, 'OK, well, let me live my life out loud so that people can then see and then judge for themselves,'" she said. "And that's what I want young people to do: Just live your life. Live it out loud." If she can get through 2016 with that mantra, we all can use it to get through 2017.