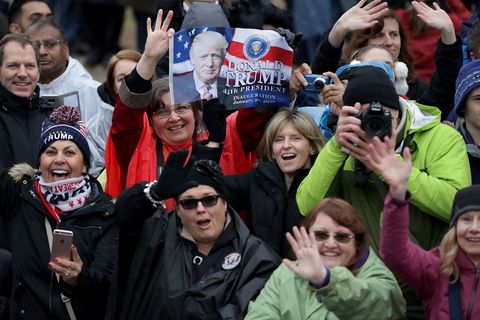 Donald Trump was sworn in as the 45th President of the United States this morning, and as of tomorrow, will presumably get started on his plan to Make America Great Again. He's already made many promises about what his first moves as POTUS will be, with repealing the Affordable Care Act so far at the top of his list that he's already signed an executive order to weaken it just hours after taking office.

But what do the people who voted him into office want?

MarieClaire.com spoke with Trump supporters in the inauguration-ceremony crowd to find out what they're expecting from him now that he's no longer their candidate, but their president.

"Donald Trump is mean enough to get it done!"

"Say it, and then do it," says Susan Gessler, 63, from Arkansas. "People are so exasperated with Republicans talking, and talking, and talking, and nothing ever gets done. Donald Trump is mean enough to get it done!" As a small business owner, Gessler's primary hope is that Trump can create more opportunities by changing the tax code. "If you're a young person trying to start your own business, the taxes are astronomical. You have to put up the capital, pay your employees, pay for their healthcare, and then they're taxing you 50%. He needs to simplify the tax code, and make it fair."

Gessler is a lifelong Republican, and early in the primary race she and her husband expected to support Jeb Bush. "We're big Bush people," she says, "I had a pug named George Dubya." But she was won over by Trump at an Arkansas event in August of 2015. "I thought, this guy has the ability to cut though the crap, and speak straight to the people." Gessler went on to serve as Trump's campaign manager in Washington County, Arkansas, where she says nobody wanted "any part" of Hillary Clinton. "In Arkansas, we've had to live with the Clintons, and we know they're crooks. They really are."

She understands much of the media's criticism of Trump: "I'm a Cotillion teacher. Do I cringe at some of the things he says? Yes. But I think he's going to do great things for the United States." Her advice for Trump, as a lifelong Republican? "Don't listen to the noise, go forward, and stop tweeting!"

"Stop calling people names," agrees Janet Maki, 50, from New Orleans, Louisiana. "I've been emailing [Trump] about that—I'm a Southern mama, and I said to him, this is something my children know not to do when they go into pre-school. It doesn't accomplish anything." Maki and Gessler both credit Kellyanne Conway for wrangling Trump into shape. "When Miss Kellyanne came on the scene, didn't he start acting like more of a statesman?"

Ralph, 57, from Oklahoma, is one of the many traditional Republicans who had a harder time accepting Trump as the party's candidate. But "he grows on you, kind of like moss. His inaugural speech was very patriotic. I think that's what the country needs right now: more patriotism, more belief that we stand as one and not as a divided race." His greatest hope is that Trump will "drop the debt ceiling, and rebuild our military."

As a resident of West Virginia, where the rate of drug overdose deaths is the highest in the nation, Roger Boarman hopes that Trump's new order will bring change. "We have a major problem with drugs in this country. When I grew up, you'd see somebody getting busted for pot. Now it's painkillers, meth, crack, heroin. Where does it end? I hope he does something about it—I think the main problem with the drugs is, there ain't no work. People have no initiative to think that there's something out there to do."

Boarman's advice for Trump: "Straighten this country out, and bring the factories back. People need to grow up knowing how to make stuff again."

Emma Dibdin Contributor Emma Dibdin writes about television, movies, and podcasts, with coverage including opinion essays, news posts, episodic reviews and in-depth interviews with creatives.
Advertisement - Continue Reading Below
More From Politics
Jot Down These 2020 Voter Registration Deadlines
What the ACLU Will Fight For in the Next 100 Years
Advertisement - Continue Reading Below
Behind the Controversy at the Women's March
Women Are Not Granted Equality in the Constitution
Electability Is About Us—Not the Candidate
Everybody Running for President In 2020
Time’s Up for Wall Street
Women of Color Ruled Last Night's Debate
Cory Booker, Rosario Dawson Are Traveling Together
Door Knocking With Field Organizers in Iowa