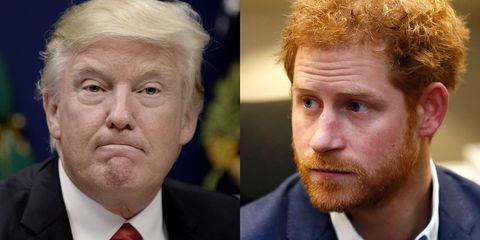 When it comes to the royal family, Donald Trump has an, um, awkward history. Mostly because he dropped the following tweet after highly invasive nude photos of Kate Middleton were leaked.

Disrespectful tweet aside, Trump meeting with the royals is an inevitability, and Prince Harry is reportedly *not* here for him. More specifically, he's "not a fan." An Us Weekly source reports that "Harry thinks the president is a serious threat to human rights," and says he's "often been vocal" about iffy feelings toward our POTUS.

Harry and Trump will presumably come face to face when Trump visits Queen Elizabeth II this summer—a highly awkward trip that could be even more awkward thanks to the fact that—as Us Weekly reports—Trump is said to have been "relentless" in his "pursuit" of Princess Diana after her split from Prince Charles.