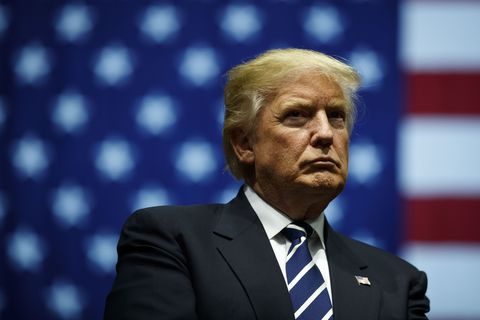 In the lead-up to the Super Bowl, Fox broadcast an interview between Bill O'Reilly and President Donald Trump. In it, Trump addressed controversial topics like the refugee ban, his relationship with Russian president Vladimir Putin, and the future of the Affordable Care Act. Here are some highlights:

On the refugee ban:

"I think it was very smooth. You have a 109 people out of hundreds of thousands of travelers and all we did was vet those people very, very carefully."

When O'Reilly countered, saying that Putin is a "killer," Trump didn't back down.

On paying for the wall:

When O'Reilly asked how Trump what kind of tariff he would levy on Mexico to pay for his proposed border wall, Trump pivoted, directing the conversation to the loss of American jobs.

"Yeah, you intimidated them. They're afraid of you," O'Reilly interjected. "You know these companies."

"I don't know they're afraid, no, no they want to do what's right," Trump insisted.

O'Reilly doubled down on his point. "They want to do what's right? Why didn't they do what was right in the past? They're afraid of you."

"Because the wrong people spoke to them," Trump said. "But they're gonna do what's right and they're bringing jobs back to Michigan and Ohio and Pennsylvania and all that places that lost their jobs. So that's already happening. I think you're gonna see a tremendous job growth in this country."

On California becoming a sanctuary state:

"Well I think it's ridiculous. Sanctuary cities, as you know, I'm very much opposed to sanctuary cities. They breed crime. There's a lot of problems. If we have to, we'll defund. Do we give tremendous amounts of money to California? California, in many ways, is out of control, as you know. Obviously the voters agree, otherwise they wouldn't have voted for me."

When O'Reilly asked if defunding was Trump's weapon of choice, Trump replied:

O'Reilly asked Trump if he believed there was "any validity to the criticism of you—that you say things that you can't back up factually," citing, as an example, Trump's unverifiable claim that 3 million illegal immigrants voted in the November election. Trump's reply focused on the voter fraud issue, side-stepping the idea of presidential responsibility with regard to facts entirely:
"Well, many people have come out and said I'm right...and it doesn't have to do with the vote, although that's the end result, it has to do with the registration. And when you look at the registration and you see dead people that have voted, when you see people that are registered in two states that voted in two states. When you see other things—when you see illegals, people that are not citizens and they're on the registration rolls, look Bill, we can be babies but you take a look at the registration, you have illegals, you have dead people, you have this, it's really a bad situation. It's really bad."
"So you think you're going to be proven correct in that statement?" O'Reilly asked.
"Well I think I already have. A lot of people have come out and said that I am correct," Trump insisted.
O'Reilly then tried to bring the conversation back around to the idea of making factual claims, saying, "But the data has to show that 3 million illegals voted."
Trump's reply? "Forget that. Forget all of that. Just take a look at the registration and we're gonna do it. And I'm gonna set up a commission to be headed by Vice President Mike Pence and we're gonna look at it very, very carefully."

On the future of American healthcare:

"In the process and maybe it'll take until sometime into next year but we are certainly going to be in the process. Very complicated. Obamacare is a disaster. You have to remember, Obamacare doesn't work. So we are putting in a wonderful plan. It's statutorily takes a while to get. We're going to be putting it in fairly soon. I think that yes I would like to say by the end of the year, at least the rudiments, but we should have something within the year and the following year. "

Kayleigh Roberts Kayleigh Roberts is the weekend editor at Marie Claire, covering celebrity and entertainment news, from actual royals like Kate Middleton and Meghan Markle to Hollywood royalty, like Katie Holmes and Chrissy Teigen.
Advertisement - Continue Reading Below
More From Politics
Mayor Pete's Husband Would Be a "First Gentleman"
How a Parkland Mom Turned Her Grief into Action
Advertisement - Continue Reading Below
He Voted for Trump. She Voted for Bernie.
How Guerrilla Feminists Are Fighting Femicide
Who Was Mayor Pete's Father, Joseph Buttigieg?
Everything We Know About Senator Warren's Husband
Nancy Pelosi, Icon, Ripped Up Trump's SOTU Address
Thoughts From a First-Time Caucus-Goer
And Now, a Word From the Future Voters of Iowa
Ayanna Pressley Wants Total Justice for Survivors