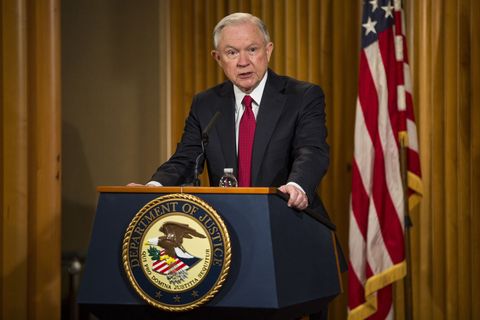 Attorney General Jeff Sessions announced a major policy change yesterday that will likely have broad and real consequences for people of color around the country. At a meeting of state attorneys general on Tuesday, Sessions said that the Justice Department would "pull back" on the federal scrutiny of police departments for civil rights violations against people of color.

"Rather than dictating to local police how to do their jobs, or spending scarce federal resources to sue them in court, we should use our money, research, and expertise to help them figure out what is happening and determine the best ways to fight crime," Sessions said Tuesday. 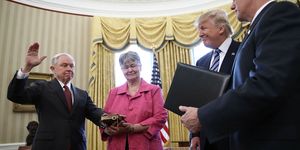 Sessions is referring to the Obama-era policy of launching civil rights investigations into troubled police departments involved in the killings of unarmed minorities. The new attorney general was dismissive of police perpetrated shootings, even suggesting that viral videos—such as the ones showing the deaths of Philando Castile or Tamir Rice—were making life more difficult for police officers.

"In this age of viral videos and targeted killings of police, many of our men and women in law enforcement are becoming more cautious," said Sessions.

Though he did not directly address the Black Lives Matter movement in his speech, the policy change undoubtedly puts a new road block in BLM's path.

It's also just the latest in a line of Obama-era policies that Sessions has rolled back since his confirmation. According to reports, Sessions was the driving force behind President Trump's removal of protections for transgender students and played a large role in the DOJ's decision to withdraw from a lawsuit challenging Texas' controversial voter ID law.

Watch some of Sessions' other comments at yesterday's meeting:

This content is created and maintained by a third party, and imported onto this page to help users provide their email addresses. You may be able to find more information about this and similar content at piano.io
Advertisement - Continue Reading Below
More From Politics
Grand New Party?
What Is Mutual Aid? For One, Not a Trend
Advertisement - Continue Reading Below
How to Help Texans During the Winter Storm Crisis
Hate Crimes Against Asian Americans Are Rising
Anti-Trans Bills Are in the Works Across the U.S.
Vanishing Act
The Women Who Took on ISIS—and Won
Yes, Trans People Belong in Sports
I’m a Parkland Survivor. Rep Greene Must Resign
Why Indian Farmers Have Been Protesting for Months