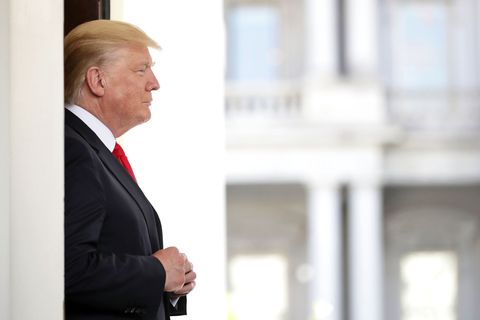 • The president emphatically called his executive order a "travel ban" on Twitter.

• He called out the Justice Department for sending a "watered down" version of the ban to the Supreme Court.

• In the past, Trump's staffers have said the order was not a travel ban.

Earlier this year, President Trump signed executive orders banning people from several Muslim-majority countries from entering the United States. Though the courts have shut them down so far, Trump's administration tried to soften the language around it, shooting down the terms "Muslim ban" or "travel ban." But in a rant Monday morning, the president seems to have thrown that strategy out, CNN reports.

Trump was tweeting against his own Justice Department, saying they sent a "watered down, politically correct version" of his executive order to the Supreme Court to seek their support. It's unclear whether he actually talked to the Justice Department first or just vented on Twitter.

The tweetstorm also included calls to action after the attacks in London that killed seven people and injured dozens. Trump also stressed that his executive order was a "travel ban," a description his aides have disputed in the past. He said on Twitter that others "can call it whatever they want, but I am calling it what we need and what it is, a TRAVEL BAN!"

But back in January, The Hill reported that press secretary Sean Spicer flat-out said it wasn't a travel ban, despite Trump constantly calling it that. "It's not a Muslim ban. It's not a travel ban," he told reporters. "It's a vetting system to keep America safe." Spicer insisted then that Trump was "using the words that the media is using," but now Trump seems to be changing his tune.

This content is created and maintained by a third party, and imported onto this page to help users provide their email addresses. You may be able to find more information about this and similar content at piano.io
Advertisement - Continue Reading Below
More From Politics
Could This Be the Last Year of Roe v. Wade?
Meet the Next Presidential Pets, Major and Champ
Advertisement - Continue Reading Below
Who Is Jen Psaki, Biden's Press Secretary?
Bernie Sanders at the Inauguration Is a Whole Mood
The Inaugural Concert Was a Cheesy Balm
Read VP Kamala Harris's Inauguration Speech
No, There Is No Inaugural Ball This Year
Kamala Harris Is "Momala" to Two Stepchildren
Read Amanda Gorman's Moving Inauguration Poem
America's New Obsession: Amanda Gorman