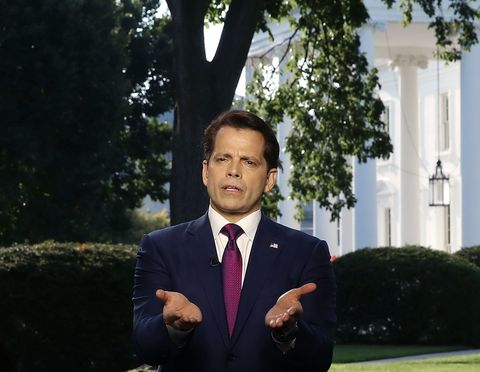 It's only been a little over a week since Anthony Scaramucci was brought on as the White House's communications director. And now, after a profane interview with The New Yorker and a major staff shake-up, "The Mooch" is out, the New York Times reports, citing three people close to the decision. An unnamed administration official confirmed the news to USA Today, and noted a formal announcement would come later in the day.

According to the Times report, the decision to fire Scaramucci came from President Trump's brand-new chief of staff, General John F. Kelly. It's not clear yet whether he'll leave the White House entirely or just take a new position, but sources told ABC News that Scaramucci offered his resignation this morning and asked to be moved to the Export-Import Bank.

This caps off an incredibly eventful tenure in the position for Scaramucci. On July 21, he was named communications director, replacing Mike Dubke who resigned two months earlier. That same day, Sean Spicer resigned as press secretary in protest. A week later, he called The New Yorker and, without asking to be off the record, unleashed a flurry of expletives against staffers like Steve Bannon and then-chief of staff Reince Priebus. Then, on Friday, news surfaced that his wife, Deidre Ball, had filed for divorce—while she was nine months pregnant with their child.

It was nice knowing you, "The Mooch." Your White House impact will live on in the form of Mario Cantone's spot-on impression.