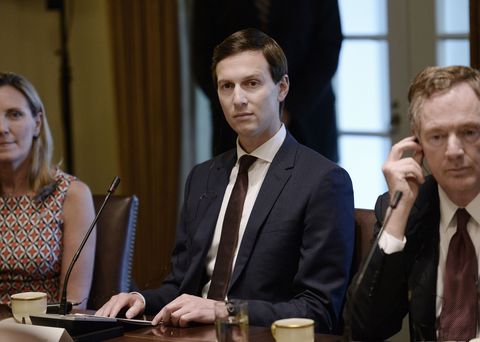 Jared Kushner, senior adviser/son in-law to Donald Trump, has been using a private email account to conduct White House business, according to a new report from Politico. As the site notes, this is just the latest of several reports of Trump administration aides using personal email accounts for official government business.

According to Politico, Kushner uses both his private account and his official White House email account when corresponding with White House officials, outside advisers, and others.

"Mr. Kushner uses his White House email address to conduct White House business," Kushner's lawyer, Abbe Lowell, said in a statement Sunday. "Fewer than 100 emails from January through August were either sent to or returned by Mr. Kushner to colleagues in the White House from his personal email account. These usually forwarded news articles or political commentary and most often occurred when someone initiated the exchange by sending an email to his personal rather than his White House address."

The private account in question was reportedly set up in December, during the transition. It's hard to miss the irony in the situation, considering Trump's routine attacks on Hillary Clinton during the campaign for using a personal email account for government business when she was secretary of state.