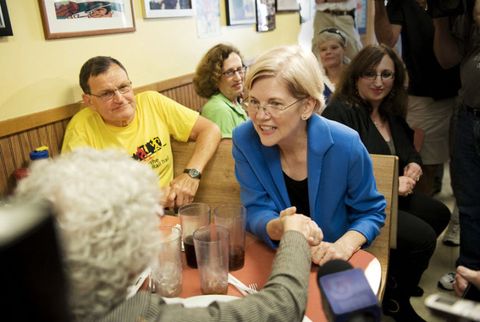 SHOCKING BUT TRUE: Women make up 16.8 percent of U.S. Congress. Even Sudan and Afghanistan have more female representation. But this year, a historic number of women want to change that. A record 298 filed to run for the House and 36 for the Senate. MC has the scoop on 11 lady pols to watch this fall—a double-amputee war hero, a Rhodes scholar, a gun-toting former police chief, and more. Raging liberal? Devout Tea Partyer? There's a new political hero here for everyone.

PERSONAL STORY: After her dad's heart attack when she was 12, Warren's parents struggled to pay their bills, inspiring her professional focus on the trials of working-class families. Married, two adult kids.

TOP ISSUES: Jobs, the economy, nixing subsidies for big oil and tax breaks for the superrich. "The game is rigged ... for billionaires, who pay lower tax rates than their secretaries."

IN HER BAG: "I carry a backpack. It has my toothbrush, Chapstick, BlackBerry, and iPod."

PERSONAL STORY: Her alcoholic stepfather was frightening to live with, so early on she decided to be a problem solver who bettered people's lives. Married, two teen children, one adult son.

IN HER BAG: Carries a small Coach briefcase stuffed with her iPad, iPhone, credit card, PowerBars, and Rockstar Lemonade.

PERSONAL STORY: Born in Mexico, one of six kids, first visited America on a school trip to Disneyland. At 22, immigrated to the U.S., became a citizen five years later. Has worked in defense electronics and as a consultant selling weight-loss products. Married, three adult children.

TOP ISSUES: A Tea Partyer who wants to return the country to its conservative roots and get people "off unemployment rolls."

CAMPAIGN FLAP: Got flak for a Facebook clip comparing food stamp recipients with animals fed in the wild. Promptly deleted it.

SOUND BITE: About her opponent, fellow Mexican-American incumbent Representative Raúl Grijalva: "[He] was born here, but he hates the American way."

PERSONAL STORY: At 21, youngest person ever to win a seat in the Hawaii legislature. Served two tours in the Middle East with Hawaii National Guard. Elected to Honolulu City Council. Single, no kids.

HISTORY WATCH: If she wins, would be first Hindu member of Congress.

RÉSUMÉ HIGHLIGHT: Spent $50 million of her own money in a losing 2010 Senate run.

TOP ISSUES: Creating jobs, which she says she's uniquely qualified to do as a business mogul. "I want to make sure future generations have the opportunity to pursue their goals."

IN HER BAG: IPad, BlackBerry, lipstick, photos of her grandchildren.

PERSONAL STORY: Iraq War vet; lost both legs after her Black Hawk was shot down. Appointed assistant secretary in the Depart-ment of Veterans Affairs by President Obama in 2009. "I still get asked if women should be allowed to hold combat jobs!" she says. "I didn't lose my legs in a bar fight." Married.

CAMPAIGN FLAP: Her opponent, Representative Joe Walsh, said, "All she does is talk about [her service]. Our true heroes ... they don't throw it in your face." Her rebuttal: "He's just trying to distract people from his failures."

IN HER BAG: "I have a fabulous vintage hot-pink purse I got for $10. It fits my speech-es, netbook, Burt's Bees Lip Shimmer in Rhubarb, and Sephora Minimergency Kit."

PERSONAL STORY: Raised by her grand-parents when her young mother became addicted to prescription drugs after going through a divorce. Lawyer. Single, no kids.

HISTORY WATCH: First out lesbian elected to Congress in 1998, and first woman from Wisconsin. If she wins, would be the first openly gay senator in U.S. history.

IN HER BAG: "Only the essentials. I keep my purse small so my male staff aren't embarrassed if they have to hold it for me."

PERSONAL STORY: African-American Mormon, ultraconservative small-town mayor, and rising Republican star. Daughter of Haitian-American immigrants who told their daughter to give back to society. Married, mother of three.

RÉSUMÉ HIGHLIGHTS: Worked as a flight attendant and businesswoman. Became mayor of Saratoga Springs, Utah, in 2010.

SOUND BITE: Via Twitter: "I'd vote for a shoe over our current president."

PERSONAL STORY: Mom was a maid, dad was a janitor. After college, became a cop and eventually Orlando's first female police chief. Married, mother of three.

TOP ISSUE: The economy. "Too many in Congress have focused on everything but jobs."

CRAZY CAMPAIGN MOMENT: Getting 700 Facebook friend requests in a day after announcing candidacy. "I thought, Wow, I'm really doing this with a little help from my friends!"

IN HER BAG: "I carry a 9-millimeter gun in my Dooney & Bourke that was a gift when I retired from the police department."

PERSONAL STORY: As a social worker, went to talk to state legislators about issues facing poor families. "Many didn't care, so I decided to run myself," she says. Served in state legislature for seven years. Also a criminal defense lawyer. Single, openly bisexual.

CRAZY CAMPAIGN MOMENT: Being chased down the street by an ostrich that escaped from an urban farm. "It was scary! I ducked into the bushes until it lost me."

IN HER BAG: "Always some campaign materials, along with sunglasses and a water bottle—two must-haves in Arizona."

PERSONAL STORY: Her only brother, Danny, died a little more than a year ago from cancer at age 52. His insurance company had refused to pay for treatment he needed to stay alive. That experience motivated Bustos to run for office. Married, three children, two grandchildren.

RÉSUMÉ HIGHLIGHTS: Journalist for 17 years; then moved on to work for a decade at a nonprofit health system. (Her first job: shoveling horse manure at age 10.)

TOP ISSUES: Job creation for the middle class, "making sure Medicare and Social Security are sound," balancing the budget (but "not on the

SOUND BITE: "I don't know how anybody who supported a Tea Party candidate in the past could not have buyer's remorse now."

IN HER BAG: "A Tide To Go stain stick—I'm always spilling my coffee; roller ball perfume—a birthday present from a great friend; a tiny notebook where I write down my favorite quotes I hear while campaigning—I'm still a reporter at heart."

PERSONAL STORY: Her grandmother and role model "Gonny," a schoolgirl when women won the right to vote, told Clark as a child that voting is a responsibility and inspired her to become a volunteer in her community, and to eventually become so involved in civic life that she decided to run for office. Married, two children.

CRAZIEST THING SAID TO HER ON CAMPAIGN TRAIL: "During a meeting with progressive allies, someone asked, 'What are you going to do about being a woman?' I looked at him right in the eye and said, 'I'm going to win.'"

IN HER BAG: "Generally almonds, dark chocolate, and iced-tea bags for our long drives—our district goes from the northern Twin Cities suburbs to Canada!"

PERSONAL STORY: Hirono's mother fled her abusive husband in Japan and settled with Mazie and her brothers in the United States. Married.

RÉSUMÉ HIGHLIGHTS: Lawyer. Served as Hawaii's deputy attorney general and lieutenant governor. Represents Hawaii's 2nd district in the U.S. Congress. (She is the first immigrant woman of Asian ancestry to be sworn into congressional office.)

CRAZY CAMPAIGN STORY: "An older man came up to me in the grocery store cautiously yet excitedly—he asked me, 'Did anyone ever tell you that you look just like Mazie Hirono?' I think I was just as surprised that he noticed me as he was when I said, 'As a matter of fact, I'm her!'"

IN HER BAG: "I don't go anywhere without my black Kate Spade handbag. It's appropriate for all occasions—from congressional hearings to dinner with my husband in Hawaii—and has a fun polka-dot inside lining. I'm an avid reader, so I'm always carrying briefing materials and my iPhone and iPad. My purse weighs a lot."

PERSONAL STORY: The first in her family to attend college, Berkley had her eyes set on a political career early on. Along with becoming the first female president of the student body at the University of Nevada, she was also the first female member of Congress elected from her district. Married, two children, two more

RÉSUMÉ HIGHLIGHTS: Right after law school, Berkley served in the Nevada State Assembly. She's been a congresswoman since 1999.

CAMPAIGN CONTROVERSY: Berkley is currently under a House ethics investigation concerning whether she used her position to benefit the business interests of her physician husband, by working to keep open a kidney transplant center where he had a contract.

IN HER BAG: "In the summer, my favorite purse is a white one that my mother used to wear when I was growing up. It comes with me on the campaign trail. I carry my BlackBerry along with pictures of my kids, mints, my wallet, tissues, lipstick, and a comb."